Cheney: No link between Saddam Hussein, 9/11

WASHINGTON (CNN) -- Former Vice President Dick Cheney said Monday that he does not believe Saddam Hussein was involved in the planning or execution of the September 11, 2001, attacks. 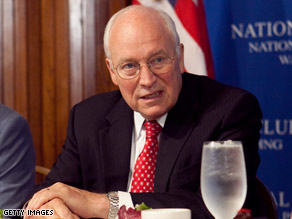 He strongly defended the Bush administration's decision to invade Iraq, however, arguing that Hussein's previous support for known terrorists was a serious danger after 9/11.

Cheney, in an appearance at the National Press Club, also said he is intent on speaking out in defense of the Bush administration's national security record because "a clear understanding of policies that worked [in protecting the United States] is essential."

"I do not believe and have never seen any evidence to confirm that [Hussein] was involved in 9/11. We had that reporting for a while, [but] eventually it turned out not to be true," Cheney conceded.

But Hussein was "somebody who provided sanctuary and safe harbor and resources to terrorists. ... [It] is, without question, a fact."

Cheney restated his claim that "there was a relationship between al Qaeda and Iraq that stretched back 10 years. It's not something I made up. ... We know for a fact that Saddam Hussein was a sponsor -- a state sponsor -- of terror. It's not my judgment. That was the judgment of our [intelligence community] and State Department."

The former vice president said in 2004 that the evidence was "overwhelming" that al Qaeda had a relationship with Hussein's regime in Iraq, and that media reports suggesting that the commission investigating the 9/11 attacks reached a contradictory conclusion were "irresponsible."

"There clearly was a relationship. It's been testified to. The evidence is overwhelming," Cheney said at the time.

"It goes back to the early '90s. It involves a whole series of contacts, high-level contacts with Osama bin Laden and Iraqi intelligence officials."

On Monday, though, Cheney identified former CIA Director George Tenet as the "prime source of information" on the relationship between Iraq and al Qaeda.

Tenet "testified, if you go back and check the record, in the fall of [2002] before the Senate Intelligence Committee -- in open session -- that there was a relationship," Cheney said.

Hussein was captured by U.S. forces in Iraq in December 2003. In November 2006, the former Iraqi leader was convicted of crimes against humanity and sentenced to death. He was executed the following December.

Cheney said on June 17, 2004 that the evidence was "overwhelming" that al Qaeda had a relationship with Hussein's regime in Iraq, and said media reports suggesting that the 9/11 commission has reached a contradictory conclusion were "irresponsible."

Among other things Monday, Cheney also called the Guantanamo Bay, Cuba, detention center a "good facility ... if you are going to be engaged in a world conflict, such as we are, in terms of global war on terrorism. You know, if you don't have a place where you can hold these people, the only other option is to kill them. And we don't operate that way."

Watch what Cheney has to say about the detention facility »

He reiterated his call for President Obama to declassify documents detailing the results of "enhanced interrogations" of high-value detainees.

Since Obama has already released memos detailing the interrogation methods, Cheney said, it is important to share the results of those interrogations with the public as well.

"I would not ordinarily be leading the charge to declassify classified information, otherwise they wouldn't call me Darth Vader for nothing," Cheney said.

On May 14, the CIA rejected the former vice president's request to declassify the documents. CIA spokesman Paul Gimigliano, in a written statement, said the two documents are the subject of pending lawsuits and therefore cannot be declassified.

Cheney said Monday that the memos previously released also were the subject of ongoing lawsuits. He said Obama can release the additional documents with "the stroke of a pen."

On May 21, Cheney gave a full-throated defense of the Bush administration's enhanced interrogations of al Qaeda prisoners during an appearance at the conservative American Enterprise Institute.

He has said that the interrogations saved the lives of "thousands, perhaps hundreds of thousands." He called the techniques the Bush administration approved "legal, essential, justified, successful and the right thing to do."