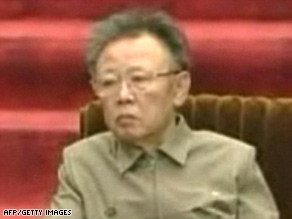 Secretary of State Hillary Clinton said pretty much the same thing last month when North Korea lobbed a long-range rocket, prompting fears that it could hit Japan or even Hawaii.

The broken record was replayed this week when President Obama called for "stronger international pressure" after North Korea turned pyrotechnics into an extreme sport, with an apparent nuclear test followed by a series of missile launches.

Fifteen years after the Clinton administration signed the Agreed Framework, essentially bribing North Korea to give up its weapons program with a nuclear power plant, the U.S. has been riding a merry-go-round of deal-making, provocation and punishment with the North.

The Bush administration also tried unsuccessfully to get North Korea to abandon its nuclear ambitions -- first by trying to squeeze the regime and then by reaching a deal with Pyongyang to dismantle its main nuclear reactor.

Economic sanctions, U.N. Security Council resolutions and even the Obama administration's policy of engagement with rogue states all have failed so far. And military action to take out North Korea's nuclear arsenal is unthinkable, with Pyongyang's enormous conventional army sure to retaliate against neighbors South Korea and Japan.

With North Korea posing an early test to his administration, Obama can't let North Korea's nuclear antics go unanswered. But as it did in April after the missile launch, the U.S. wants to handle this in a way that will preserve the ability to restart the so-called six-party talks. Obama's aides are debating the pros and cons of what limited options the administration has.

For now, eyes are on the Security Council, where the U.S. and its allies are discussing elements of a resolution. Some of the ideas being proposed are tightening existing sanctions, intercepting nuclear cargo and cutting off North Korea's access to cash, possibly with a ban on the lucrative sale of conventional weapons it uses to fund its nuclear program.

The role of China and Russia, typically reluctant to impose sanctions against North Korea, will be crucial. Last month the U.S. could barely get Beijing and Moscow to sign onto to a watered-down statement criticizing North Korea. But administration officials involved in North Korea policy say the one silver lining in the latest antics is that they were so outrageous they crossed a line, which could galvanize Russia and China to act.

Officials acknowledge that with North Korea already sanctioned to the hilt, such measures may do little more than get the regime's attention. But maybe that is the point. North Korea is known for its attention-grabbing, and some officials predict (read: wish) that a strong international reaction could be what Pyongyang needs to nudge it back to the table.

As one senior official put it, "Once we both know we have each other's attention, we can have a drink and a smoke and get back to business."

But even as the administration looks down the road at another round of six-party talks, officials are questioning the long-term viability of the exercise. Gary Samore, the president's top adviser for nonproliferation, and Hillary Clinton have both said that North Korea does not appear to want the talks to move forward.

That's the thing about talks -- they generally aren't productive when only one side is talking.

Seriously complicating matters is the health of ailing North Korean leader Kim Jong Il and the lack of clear succession in place. Officials say that the country's internal dynamics are a large, if not the critical, component driving North Korea's actions.

It's particularly concerning because the future of the regime is one where nobody, including the Chinese, can do anything to alter the equation. In that case even the most strenuous international diplomacy may influence North Korean behavior on the margins but will have little effect on how this situation ultimately plays out.

With decades of diplomacy unable to produce a denuclearized Korean Peninsula, it begs the question of whether it is time for a fundamental overhaul of U.S. policy toward North Korea. There are serious conversations in Washington and among capitals about whether North Korea has reached a "tipping point," offering the world final proof it is intent on developing what it calls a "nuclear deterrent."

A nuclear weapon with the missile systems to deliver it would not only pose an existential threat to South Korea and Japan, officials fear it would spark an arms race in East Asia -- turning this region, which has been relatively stable for 40 years, into a much different place.

The U.S. and its allies must huddle quickly and develop a plan to prevent this alternate -- and scary -- reality.