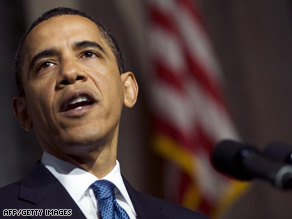 President Obama says he is trying to clean up "a mess" left behind by the Bush administration.

Obama said his administration is trying to clean up "a mess" left behind by the Bush administration. He defended his plan to close the Guantanamo Bay detention center in Cuba, his ban on torture, the release of Bush-era interrogation memos and his objection to the release of prisoner photos.

Cheney stood up for the Bush administration's security record, arguing that Obama has weakened the country's ability to combat al Qaeda and other extremists. He defended the use of enhanced interrogation techniques as a success that changed thousands of lives. He called the release of the Bush-era memos a reckless distraction and belittled Obama's decision to close Guantanamo "with little deliberation and no plan."

"He is such a wildly unpopular figure trying to defend such discredited policies that Democrats would like to be able to find a way to pay him to give more of these kinds of speeches," Jim Manley said.

In the past two months, the former vice president has become a frequent critic of the new administration in numerous national media interviews.

"Listen, Dick Cheney has been around this town for the last 35 years -- 40 years. He knows how this town works, and frankly, he's very knowledgeable when it comes to the strategies that the administration took with regard to dealing with this terrorist threat. And having him out there, outlining those strategies and why we're engaged in this, I think, is helpful to the debate," Boehner said.

Republicans were quick to side with Cheney on Obama's plan to close Guantanamo, with Rep. Lamar Smith charging that the president should "put Americans' safety ahead of an image problem he himself created by making a campaign promise to close Gitmo."

"The administration asserts that transferring terrorists from a detention facility on an isolated island to a prison inside the U.S. will make Americans safer. The administration's claims are completely contrary to common sense. By the president's logic, we should close all other jails and prisons, too," Smith, R-Texas, said in a statement.

Obama's plans to close the detention center have been met with opposition from both sides of the aisle in Congress. Following in the steps of House Democrats, Senate Democrats on Tuesday rejected the administration's request for $80 million to close the facility.

They instead asked that Obama first submit a plan spelling out what the administration will do with the prisoners when it closes the prison.

He also pointed out that no one has ever escaped from a federal "supermax" prison.

Rep. Doug Lamborn, R-Colorado, whose district houses a supermax prison, adamantly does not want detainees brought to that prison.

"The president did not say where people would go who were convicted under military tribunals or who are to be released by courts or who are in the 'too dangerous to release' category, so his plan today really has a lot of gaps in it," he said.

And Michael Steele, the chairman of the Republican National Committee, said it would be "dangerous, naive and a threat to America's national security" to put detainees on U.S. soil.

Watch Durbin's suggestions on how to handle the detainees »

"The president is right in saying Guantanamo is more than a detention facility. It's become a symbol. And sadly, it's become an organizing tool around the world for terrorism. The sooner that we bring Guantanamo to a close, the better," he said.

Rep. Mike Pence, chairman of the House Republican Conference, accused the president of continuing to "to bow to world opinion" when it comes to Guantanamo.

House Republican Whip Eric Cantor said closing the prison is "too complex an issue to rush to resolution."

"At the end of the day, when it comes to terrorism, no detail is too small, and we must have only one priority: the safety and security of the American people," he said.

Democratic Sen. Patrick Leahy, chairman of the Senate Judiciary Committee, said "political rhetoric has entirely drowned out reason and reality" in the debate over where to put the detainees.

House Speaker Nancy Pelosi praised Obama's address as "a sensible, balanced approach to the treatment of detainees and to the handling of state secrets."

One decision that pleased some conservatives was Obama's move to restart former President Bush's military commissions.

"The previous administration sought ways around the law," he said. "This president seeks to follow the law and keep us safe, and he believes in the long haul -- as do I -- that following the law and following our values in conjunction with holding terrorists is absolutely essential to both winning the war and being safe."

"I want to ascribe to people the best of motives, and I presume that the former vice president believes for whatever reason that force is the only thing that works," he said. "Unfortunately, that goes against all of the evidence."

As far as former President Bush's thoughts on the dueling speeches, he didn't watch them.

A source close to Bush said the former president was traveling at the time, en route to New Mexico, where he is the keynote speaker Thursday night at a fundraising dinner for a scholarship program for students at Artesia High School.