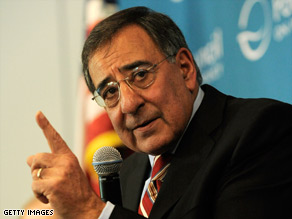 CIA Director Leon Panetta speaks about the fight against al Qaeda at the Pacific Council on International Policy.

Asked about criticism of the missile attacks by counterinsurgency experts, Panetta said he did not want to discuss specifics, "but I can assure you that in terms of that particular area, it is very precise and is very limited in terms of collateral damage."

"Very frankly, it's the only game in town in terms of confronting or trying to disrupt the al Qaeda leadership," Panetta told the Pacific Council on International Policy in Los Angeles.

Pakistan has complained repeatedly about what it says are airstrikes on its territory by U.S.-operated drones. The U.S. military in neighboring Afghanistan does not comment on the attacks, which typically target Islamic militants in the border region, but the United States is the only country operating in the region known to have the capability to launch missiles from remote-controlled aircraft.

Panetta's predecessor, Michael Hayden, was asked about the drone attacks on Pakistani territory shortly before he left office in January, but addressed it far less directly than Panetta.

"I'm not going to talk about anything operational, and I'm not confirming or denying how any of this happens, we're not getting into that," he said. But he said he believed al Qaeda leaders had come to view Pakistan's tribal regions as "neither safe nor a haven."

Two leading former advisers on counterinsurgency warfare, David Kilcullen and Andrew Exum, wrote in The New York Times over the weekend that the strikes have killed about 14 terrorist leaders in the past three years -- but Pakistani sources say the civilian death toll could be as high as 700.

While U.S. officials dispute that ratio, Kilcullen and Exum wrote, "Every one of these dead noncombatants represents an alienated family, a new desire for revenge and more recruits for a militant movement that has grown exponentially even as drone strikes have increased."

"The persistence of these attacks on Pakistani territory offends people's deepest sensibilities, alienates them from their government and contributes to Pakistan's instability," Kilcullen and Exum said. They compared the tactics to British bombardment of the same region in the 1920s and French airstrikes on Algeria in the 1950s, arguing that the strikes were likely to remind Pakistanis of colonial rule.

U.S. forces have been battling al Qaeda and its Taliban allies in Afghanistan since the terrorist network's 2001 attacks on New York and Washington. Both have taken root across the rugged border in Pakistan, where Pakistani troops are waging an air and ground offensive to crush the Taliban in the Swat Valley, northwest of the capital, Islamabad.

Prime Minister Yusuf Reza Gilani said Monday that the offensive will go on "until peace is established."