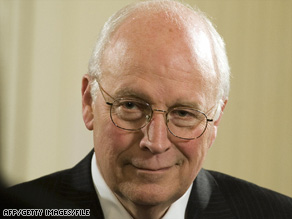 The allegation was included in an online broadside aimed at former Vice President Dick Cheney by Lawrence Wilkerson, chief of staff for then-Secretary of State Colin Powell. In it, Wilkerson wrote that the interrogation program began in April and May of 2002, and then-Vice President Cheney's office kept close tabs on the questioning.

"I couldn't walk into a courtroom and prove this to anybody, but I'm pretty sure it's fairly accurate," he told CNN.

Most of Wilkerson's online essay criticizes Cheney's recent defense of the "alternative" interrogation techniques the Bush administration authorized for use against suspected terrorists. Cheney has argued the interrogation program was legal and effective in preventing further attacks on Americans.

Critics say the tactics amounted to the illegal torture of prisoners in U.S. custody and have called for investigations of those who authorized them.

Representatives of the former vice president declined comment on Wilkerson's allegations. But Wilkerson told CNN that by early 2002, U.S. officials had decided that "we had al Qaeda pretty much on the run."

"The priority had turned to other purposes, and one of those purposes was to find substantial contacts between al Qaeda and Baghdad," he said.

The argument that Iraq could have provided weapons of mass destruction to terrorists such as al Qaeda was a key element of the Bush administration's case for the March 2003 invasion. But after the invasion, Iraq was found to have dismantled its nuclear, chemical and biological weapons programs, and the independent commission that investigated the 2001 attacks found no evidence of a collaborative relationship between the two entities.

Wilkerson wrote that in one case, the CIA told Cheney's office that a prisoner under its interrogation program was now "compliant," meaning agents recommended the use of "alternative" techniques should stop.

At that point, "The VP's office ordered them to continue the enhanced methods," Wilkerson wrote.

"The detainee had not revealed any al Qaeda-Baghdad contacts yet. This ceased only after Ibn al-Shaykh al-Libi, under waterboarding in Egypt, 'revealed' such contacts."

Al-Libi's claim that Iraqi dictator Saddam Hussein's government had trained al Qaeda operatives in producing chemical and biological weapons appeared in the October 2002 speech then-President Bush gave when pushing Congress to authorize military action against Iraq. It also was part of Powell's February 2003 presentation to the United Nations on the case for war, a speech Powell has called a "blot" on his record.

Al-Libi later recanted the claim, saying it was made under torture by Egyptian intelligence agents, a claim Egypt denies. He died last week in a Libyan prison, reportedly a suicide, Human Rights Watch reported.

Stacy Sullivan, a counterterrorism adviser for the U.S.-based group, called al-Libi's allegation "pivotal" to the Bush administration's case for war, as it connected Baghdad to the terrorist organization behind the 2001 attacks on New York and Washington.

And an Army psychiatrist assigned to support questioning of suspected terrorists at the Guantanamo Bay prison camp in Cuba told the service's inspector-general that interrogators there were trying to connect al Qaeda and Iraq.

"This is my opinion," Maj. Paul Burney told the inspector-general's office. "Even though they were giving information and some of it was useful, while we were there a large part of the time we were focused on trying to establish a link between aI Qaeda and Iraq and we were not being successful in establishing a link between aI Qaeda and Iraq. The more frustrated people got in not being able to establish this link ... there was more and more pressure to resort to measures that might produce more immediate results."

Burney's account was included in a Senate Armed Services Committee report released in April. Other interrogators reported pressure to produce intelligence "but did not recall pressure to identify links between Iraq and al Qaeda," the Senate report states.

Cheney criticized Powell during a television interview over the weekend, saying he no longer considers Powell a fellow Republican after his former colleague endorsed Democratic candidate Barack Obama in the 2008 presidential election.

Wilkerson said he is not speaking for his former boss and does not know whether Powell shares his views.