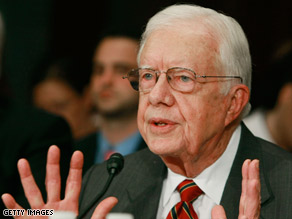 "Collectively, nothing could be more important than this question of energy," Carter said during a rare presidential appearance before a congressional committee.

"I would guess that our entire status as a leading nation in the world will depend on the role that we play in energy and environment in the future."

Carter, who in 1977 famously declared the fight for energy independence to be "the moral equivalent of war," told members of the Senate Foreign Relations Committee that reaching that goal is crucial to ending the country's "vulnerability to possible pressures and blackmail."

Right now, he noted, "whether we admit it or not, we are very careful not to aggravate our major oil suppliers."

He also asserted that more jobs will be gained than lost by transitioning the country away from fossil fuels and toward cleaner, renewable energy sources.

Among other things, the American Clean Energy and Security Act would create a controversial "cap-and-trade" system establishing steadily declining limits on greenhouse gas emissions over the next four decades.

Under the bill, polluters would be able to buy and sell emissions credits while utilities would be required to generate an increasing amount of power from renewable sources.

Congressional attention to the issue is being driven by President Obama, who, like Carter, has placed energy near the top of his domestic agenda.

Carter suggested that energy reform advocates craft an omnibus proposal that could be considered collectively by Congress in order to minimize "adverse influence of special interest groups" opposed to any major changes.

Carter noted that his administration nevertheless succeeded in reducing net oil imports by 50 percent, from 8.6 to 4.3 million barrels per day. But after "a long period of energy complacency," he said, daily imports to the United States are now almost 13 million barrels.

"Although our rich nation can afford these daily purchases, there is little doubt that, in general terms, we are constrained not to alienate our major oil suppliers, which puts a restraint on our nation's foreign policy," Carter said.

The former president reminded committee members that, as part of his drive for renewable energy, he had ordered 32 solar panels to be placed on the roof of the White House in 1979. But the panels were removed "almost instantaneously after [Ronald Reagan] moved into the White House, with assurances to the American people that such drastic action would no longer be necessary."

Sen. John Kerry, D-Massachusetts, opened the hearing by noting that the price of a barrel of oil has fallen $90 below the record high hit in summer 2008. Unfortunately, Kerry added, the "political will to take decisive action has dissipated" as each past energy crisis has subsided.

Carter "had the courage to tell the truth to Americans [and] set America on the right path in the 1970s," Kerry said. "Regrettably, the ensuing years saw those efforts unfunded [and] stripped away."

Richard Nixon was the first president to set a goal of energy independence, Kerry noted. Nixon called for that goal to be reached by 1980.