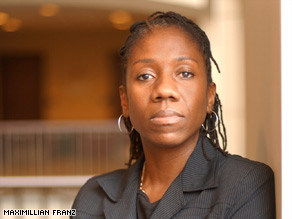 (CNN) -- I sometimes marvel that I probably couldn't get hired at my law school today.

Fifteen years ago I was a young civil rights lawyer with a strong litigation record and a few good ideas about the relationship between racial diversity on courts and principled decision-making who wanted to enter law teaching.

My colleagues at the University of Maryland Law School took a chance in hiring me -- a chance that I would write well and consistently, and that my litigator's communication skills would translate well in the classroom.

Today, they'd never hire me. Standards have shifted, my law school has moved up in the rankings, and now our faculty rarely even interview candidates who haven't already published a well-placed article. In just a little over a decade, the formula for hiring law professors, especially at the most competitive schools, has shifted irrevocably.

It is much the same on the Supreme Court. It's been nearly two decades since anyone who has not served as a federal appellate judge -- for at least a little while -- has been confirmed to sit on the court. What this means is that justices on the court have come to be representative of a very narrow slice of the profession.

Thurgood Marshall (a federal appellate judge when he was nominated by President Johnson in 1966) is likely the last justice on the court who had personally defended a criminal defendant at trial in a capital case.

It's a shame because this means that the deliberations of the court lack the perspective of lawyers who understand the challenges that face lawyers presenting evidence in some of the toughest and most complex criminal and civil trials.

The complexities of jury selection and the idiosyncrasies of state court practice are all outside the experience of almost all of the justices on the current court.

That a criminal defense attorney's failure to put on witnesses or make a closing argument in a capital case is unlikely to be a "tactical decision" and more likely to constitute ineffective assistance of counsel (see Bell v. Cone, an 8-1 decision from 2002) might be more understandable on a court where some justices in the conference could explain from personal knowledge the level of competence and engagement required of attorneys in capital trials.

And as the Supreme Court has shown in cases in the past, most of the justices may have very little appreciation of the pressures faced by elected state court judges, and the importance of holding strictly to standards that require judicial disqualification from cases in which their actions or statements may give rise to even the appearance of bias.

It may face this issue again in a case this term addressing the question of whether, and under what circumstances, elected state court judges are required to recuse themselves from hearing cases in which their impartiality can be reasonably questioned.

The truth is that some of the most thoughtful, distinguished lawyers in the profession are in the fields of criminal defense and civil trial practice. Legal academia is likewise a source of tremendously talented lawyers, many of whom have devoted their professional lives to a deep and unrelenting engagement with exploring the reach and meaning of the Constitution.

Law professors are, in fact, uniquely well-prepared for the insular life of reading and writing that characterizes the bulk of the work on the court. And yet lawyers from these fields have almost been disqualified, as a matter of practice, from serious consideration, in favor of federal circuit court judges.

The reliance on the federal appellate bench as the sole feeder to the Supreme Court also means that the pool from which nominees are considered is overwhelmingly white and male.

The federal appellate courts are hardly shining founts of either racial or gender diversity. Only 25 percent of justices on federal circuit courts are women. And that overall figure doesn't tell the whole story. There has only been one woman to sit on the Eighth Circuit Court of Appeals, which covers seven mid-western states from Arkansas to Minnesota. Only one woman. Ever.

The Fourth Circuit Court of Appeals, despite including states with some of the highest African-American population numbers in the country, only became racially integrated in late 2000 with President Clinton's recess appointment of Roger Gregory, an African-American Virginia lawyer.

By contrast, some state appellate courts have achieved an admirable level of diversity. Thirty-five percent of chief justices on state courts are women. The chief justices of the highest courts in both Georgia and Florida are black women. Although there's still a way to go, law schools faculties are also gaining substantial ground in gender diversity. Twenty percent of law school deans are women, and that number is likely to rise sharply in the next 10 years.

It's been gratifying to hear that three women with more diverse backgrounds may be on President Obama's shortlist for the court. Elena Kagan is the former dean of Harvard Law School and Obama's new solicitor general. Leah Ward Sears is the chief justice of the Georgia Supreme Court. And of course Jennifer Granholm is the governor of Michigan.

As could be expected, we've already heard murmurs that Kagan and Granholm should not be considered because they lack judicial experience. This is just wrong-headed and reflective of the wholesale acceptance of an increasingly narrow view of Supreme Court qualifications.

Each of these nominees has been touted as a talented lawyer who could help bring much-needed gender diversity to the court (which after the retirement of Justice Sandra Day O'Connor in 2006 left Justice Ruth Bader Ginsburg as the lone woman justice). But perhaps these candidates should best be recognized for their potential to bring much-needed professional diversity to the court.

The opinions expressed in this commentary are solely those of Sherrilynn Ifill.