(CNN) -- Behind closed doors in recent days, senior White House aides have been saying that measuring President Obama's first 100 days is the journalistic equivalent of a Hallmark holiday. 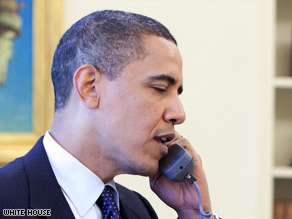 President Obama called Sen. Arlen Specter after Specter switched from the Republican to the Democratic Party.

"They don't mean anything," quipped one aide, "but you have to observe them."

But literally in the next breath the very same aide got pretty bold -- saying anyone doing one of these anniversary stories would be "hard-pressed to find another administration that has done as much" as Obama so early in a presidency, even when compared to the productivity of FDR.

"[Most productive] I think in my lifetime," said the senior aide. "An extraordinary beginning, but just the beginning."

In other words, Obama is just showing up for work on this "Hallmark holiday" with more than just a crummy greeting card to celebrate the occasion.

There will be metaphorical flowers and candy in the form of a White House welcome for the president's new BFF and favorite Democrat, Sen. Arlen Specter, to claim bipartisanship.

That's followed by a quick afternoon jaunt to the Midwest to show off early results at a town hall meeting in Missouri (the Show-Me State, get it?).

All of that capped off by the bright lights of a prime-time news conference in the East Room of the White House.

All this begs the question: Why did Obama's team suddenly embrace all this hoopla for what they claim to be an artificial holiday?

Part of the reason is that the president's advisers privately express some amazement that amid all of the crises facing America, Obama's approval ratings are sky-high.

They know it's probably inevitable that his poll numbers will come down, so they want to keep using what is probably their best asset -- the president himself -- now while they have the public's attention and can take advantage of his appeal.

"The American people are taking a measure of the president," a second top White House aide told me, "and they are saying 'we are happy with the decision we made' " in November.

Another reason for the aggressive sales pitch is even some of the president's fiercest Republican critics have to grudgingly admit the man has been busy charting an ambitious course in tough times.

Not to mention an expansion of children's health insurance and historic pay equity changes.

On foreign policy, he's largely kept campaign promises to wind down the war in Iraq, increase the U.S. troop presence in Afghanistan, and begin the process of shutting down the U.S. military prison at Guantanamo Bay.

But now comes the really hard part, and there are political land mines all around.

On domestic policy, Obama is facing roadblocks on his grand plans for health care and energy amid Republican charges he will sink the country deeper into debt to pay for it all. Oh, and did I mention there's still great uncertainty about the housing market, stock market, and auto bailouts?

On foreign policy, Iraq and Afghanistan are still huge wild cards. Meanwhile, the administration's diplomatic overtures to Iran, Cuba and Venezuela could produce spectacular results or they could fail dramatically and feed into Republican charges he's weak on national security.

The Specter party switch gives the president a tactical victory in that if his party has a 60-seat, filibuster-proof majority in the Senate, he can potentially muscle through key pieces of his agenda.

But this alone will not solve Obama's problems. There will be days when Specter bucks the president, and days when conservative Democrats like Sen. Ben Nelson jump ship, and suddenly 60 votes evaporate. iReport.com: Grade Obama's first 100 days

That's why the Specter move has to be considered in a much broader context -- this is an opportunity for Obama to deal with a much broader campaign promise that he has not come close to achieving, changing the tone in Washington and figuring out how to get both parties to work together. Can Obama use this moment to develop a genuinely bipartisan governing coalition, or will bitterness over Specter's move just lead both parties to retreat to their respective corners?

Look for the president in tonight's prime-time press conference to try and pivot to the next 100 days by saying the early burst of activity -- in the words of a top aide -- has been "a good down payment on change and he's ready to work to bring both parties together.

"The president has accomplished a lot," asserted this top aide, "but he also laid the foundation for the next 100 days."

The success of those next 100 days and beyond may largely be measured on how well the president can forge consensus with key Republicans on some of these big issues.

All About Guantanamo Bay • Arlen Specter