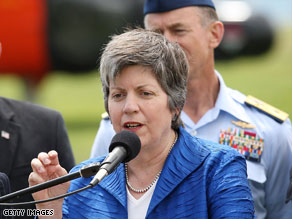 "The secretary started the meeting with an apology to me personally, to the American Legion and to the entire veterans community," Rehbein told reporters after the meeting.

In a statement issued by the department, Napolitano said, "We connected meaningfully about the important issues that have emerged over recent days, and I offered him my sincere apologies for any offense to our veterans caused by this report. ... I pledge that the department has fixed the internal process that allowed this document to be released before it was ready."

The report was an unclassified assessment sent to law enforcement agencies. It was titled "Rightwing Extremism: Current Economic and Political Climate Fueling Resurgence in Radicalization and Recruitment."

The mention of combat veterans surfaced on a conservative radio program earlier this month, and it drew the scorn of commentators and conservative members of Congress. Rep. John Carter, R -Texas, called on Napolitano to resign.

Rehbein said Friday it is time to move forward.

"In the mind of the American Legion, I think her apology was sufficient," he said. "The way the Vietnam veterans were treated once they came home, that's what drives the sensitivity to this, because those things start small and then grow from there, and we need to make sure anytime something like that happens we need to step on that and make sure it goes away very quickly."

All About Janet Napolitano • U.S. Department of Homeland Security • The American Legion