WASHINGTON (CNN) -- A lawsuit filed against the U.S. government by four British men formerly held at the military detention facility at Guantanamo Bay, Cuba, was dismissed again Friday by a federal appeals court. 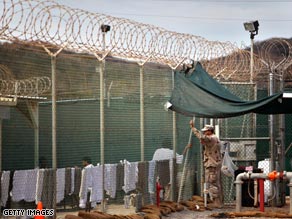 A guard leans on a fence talking to a detainee inside the U.S. Naval Base in Guantanamo Bay, Cuba.

The three-judge panel agreed with assertions made by both the Bush and Obama administrations that the men were not entitled to relief in federal courts because the prisoners were foreigners held outside the United States.

The men claim they were physically abused, tortured and denied their religious freedom rights.

At issue is what rights noncitizens have to contest in U.S. courts their treatment by the U.S. military during a time of war.

The Supreme Court had ordered the appeals court to reconsider its decision last year denying the British prisoners' claims. The high court has said the roughly 240 men held at Guantanamo are entitled to some rights under the U.S. Constitution.

But in their 11-page ruling, the three appeals court judges reiterated their view that U.S. officials could not be held responsible for any mistreatment because "there was no authority for -- and ample authority against -- plaintiffs' asserted rights at the time of the alleged misconduct."

The four British Muslim prisoners claim they were held and interrogated "under appalling conditions" in Afghanistan and at the U.S. Navy base at Guantanamo. They claim beatings, painful shackling and humiliating treatment over their Muslim faith, such as interrupted prayers and being forced to shave their beards.

They sued Pentagon officials and officers under the Religious Freedom Restoration Act, but their claims have been repeatedly rejected. The men said the Pentagon officials -- including former Defense Secretary Donald Rumsfeld -- authorized and carried out the mistreatment. The military denies the claims.

The appeals court said the U.S. officials should not be held responsible for lawsuits over their conduct, in part because the four prisoners have since been released from custody. "We do not require government employees to anticipate future developments in constitutional law," said the three judges, all of whom were named to the bench by Republican presidents.

"At the time of their detention, neither the Supreme Court nor this court had ever held that aliens captured on foreign soil and detained beyond sovereign U.S. territory had any constitutional rights," the court said.

The Obama administration filed a brief in the case supporting the Pentagon officials, saying that holding such officials liable for developments in the future could affect their ability to make appropriate policy decisions.

The attorneys for Shaqif Rasul, one of the four former prisoners, had successfully argued an earlier, separate case that reached the Supreme Court in 2004, the year Rasul was freed and returned to England.

In that case, the justices said the detainees had a basic right to challenge their confinement in federal court.

"The courts of the United States have traditionally been open to nonresident aliens," the high court said in its 6-3 ruling. That right was reaffirmed in a ruling in June involving another Guantanamo prisoner, Bosnian Lakhdar Boumediene.

Federal courts in Washington have since been flooded by a variety of appeals from current and former Guantanamo prisoners.