Obama: 'We can move U.S.-Cuban relations in a new direction'

PORT OF SPAIN, Trinidad and Tobago (CNN) -- President Obama said Friday he is seeking "a new beginning" in U.S. relations with Cuba. 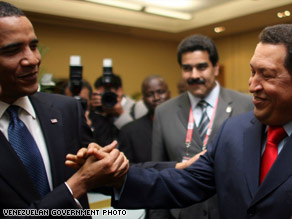 President Obama and Venezuela President Hugo Chavez greet each other Friday at the Summit of the Americas.

Before addressing the representatives of 34 countries at the Summit of the Americas, Obama and Venezuelan President Hugo Chavez saw each other and shook hands.

"Every one of our nations has a right to follow its own path," Obama told the assembly. "But we all have a responsibility to see that the people of the Americas have the ability to pursue their own dreams in democratic societies.

"Toward that end, the United States seeks a new beginning with Cuba."

Obama arrived in Trinidad and Tobago on Friday evening for the Summit of the Americas, a key meeting of hemispheric powers. Although it was not represented at the talks, the subject of Cuba dominated the president's speech.

In prepared remarks, Obama said that "decades of mistrust" must be overcome, but noted that he has already loosened restrictions that limited Americans from traveling to visit relatives in Cuba and from sending money to them.

Obama lifted all restrictions Monday on the ability of individuals to visit relatives in Cuba, as well as to send them remittances.

That may be just the beginning. "I am prepared to have my administration engage with the Cuban government on a wide range of issues -- from human rights, free speech and democratic reform to drugs, migration and economic issues," he said.

"Let me be clear: I am not interested in talking for the sake of talking. But I do believe that we can move U.S.-Cuban relations in a new direction."

Obama's comments represent a significant shift in a U.S. policy that has remained largely unchanged since 1962, when the U.S. government imposed a trade embargo with Havana.

Castro told a summit of leftist Latin American leaders gathered in Venezuela, "We are prepared, wherever they want, to discuss everything -- human rights, freedom of the press, political prisoners," Castro said Thursday.

Havana played a major role in Obama's remarks, where he called for rejection of "stale debates" that have undermined opportunities to forge new partnerships.

"They would have us make the false choice between a rigid, state-run economy and unbridled and unregulated capitalism; between blame for right-wing paramilitaries or left-wing insurgents; between sticking to inflexible policies with regard to Cuba or denying the full human rights that are owed to the Cuban people.

"I didn't come here to debate the past -- I came here to deal with the future. As neighbors, we have a responsibility to each other and to our citizens. And by working together, we can take important steps forward to advance prosperity, security and liberty."

Chavez's press office said Obama walked up to Chavez to greet him, a meeting it called "historic."

"President Chavez expressed his hope that relations between the two countries would change," the press office said, quoting Chavez as having told his U.S. counterpart, "Eight years ago with this same hand I greeted Bush. I want to be your friend." It said Obama then thanked Chavez.

Chavez once referred to former President Bush as "the devil."

On other matters, Obama, who said he is committed to fighting inequality "and creating prosperity from the bottom up," announced a Microfinance Growth Fund for the hemisphere and proposed creating an Energy and Climate Partnership of the Americas "to promote renewable energy and reduce greenhouse gas emissions."

He also vowed to "take aggressive action" to slash demand for illegal drugs, and to halt the movement of arms and money to Mexico.

Obama's push for a rapprochement with Havana is supported by most Americans, 71 percent of whom said they favor re-establishing diplomatic relations, according to a CNN/Opinion Research Corp. poll carried out April 3-5.

The poll had a sampling error of plus or minus 3 percentage points.