(CNN) -- Tens of thousands of people spent part of April 15 at organized "tea party" demonstrations across the country, protesting what some view as excessive government spending and bailouts. 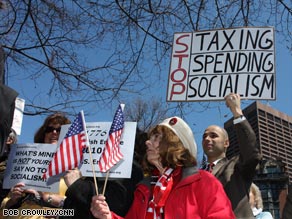 Widely promoted by conservatives on videos and blogs, the movement appears, in part, a reflection of a general anger among people who contend the government takes too much from their pocketbooks.

Though financial-industry and automotive bailouts were launched at the end of George W. Bush's presidency, many demonstrators aimed their words and signs at the Obama administration, criticizing it in part for the recently passed stimulus package.

CNN's Rick Sanchez spoke Wednesday afternoon to one of the organizers of the "tea party" protests, Tim Phillips, president of Americans for Prosperity. The organization's Web site identifies him as "a veteran political strategist and one of the nation's premier grassroots organizers with nearly two decades of experience, including presidential, gubernatorial and congressional races, as well as state legislative, local and issue-advocacy campaigns." He is a former chief of staff to Rep. Bob Goodlatte, a Republican from Virginia.

Here are excerpts from the interview.

SANCHEZ: How do you feel about the turnout? As I looked at it, I saw that there were a couple of places where the group was small. But, still, you have to take into account that the spread is amazing.

SANCHEZ: This is all over the country.

PHILLIPS: There are literally -- the best estimate is between 800 and 1,000 of these things across the country.

SANCHEZ: Why didn't we see these during the Bush administration, who, by the way, has been accused, by the right and the left, of being a bit of a spendthrift himself?

PHILLIPS: Well, let me tell you, in 2006, I was in these very studios as part of Americans for Prosperity's Ending Earmark Express.

We went to the site of the 50 most outrageous earmarks in the country.

We went to more Republican districts than Democrat districts. And it's similar, because it's overspending and wasteful spending.

SANCHEZ: But you know what takes -- you know, my old football coach used to call it intestinal fortitude. It's when you do what no one expects you to do. Like [Rep.] Ron Paul [R-Texas], when he stood up in front of a Republican debate and was booed for saying this administration, referring to Bush, has been irresponsible and has spent too much, that's surprising. That's news.

Those are the guys you have got to give credence to. Republicans now blaming Obama for spending too much, it almost looks like, gee, there is a surprise. You guys were going to do this no matter what he did.

PHILLIPS: I think you're missing an important point. Today is not a Republican thing. The Republican Party frankly is too disorganized and too unsure of itself to pull off stuff like this.

This is a grassroots uprising that is telling elected officials in both parties, hey, guys, there is too much debt. We're going to pile up more debt this year [than we did] from 1776 to 1980 in adjusted dollars.

SANCHEZ: And I think that's fair. And I think a lot of people would agree with you, looking at it from a fiscal standpoint.

SANCHEZ: But then there's also this. We were doing a report earlier today. One of our correspondents was on the air reporting. And I noticed something behind her. And I said, oh my goodness, look at that. And I bet you it's not something Tim's going to be pleased by.

Look at that, what it says. Go ahead and turn around. Look at the screen right there.

SANCHEZ: It's a white hand giving money to a black hand. You know, what do you make of that? Does that bother you a little bit?

PHILLIPS: I think that any time you have literally tens of thousands of people from all walks of life coming out to rallies and events, there's going to be one sign that's objectionable or one statement that you would rather not be said.

SANCHEZ: It's not representative?

[Not] in any way does it discount, you know, the good American protest that's going out there today.

Here's what I would challenge every media organization to do: Go to the rally in Atlanta [Georgia] today or any of the rallies that have happened across the country and grab the first 12 people you see. And say, why are you here and tell me what about your background. You're going to find the most broadly represented mainstream Americans who are concerned about the future with all this spending, all this debt, all these new taxes.

I would challenge organizations to do that. Whenever you've got tens of thousands, really, over 100,000, coming to somewhere between 800 and 1,000 events across the country....

SANCHEZ: But you're saying it's by far the exception and by no means the norm.

PHILLIPS: Right. And the best way, though, to prove that is go to the events and by the way, you've been showing people at the rallies who are normal average folks and I'm not dinging you.

But that's the best way to do it. The events I've been to across the country leading up to today and then today, these are the most mainstream, broadly defined Americans who are genuinely concerned.