WASHINGTON (CNN) -- President Obama touted his tax cut Wednesday as an important component of his plan to right the U.S. economy and put working families on a more prosperous path. 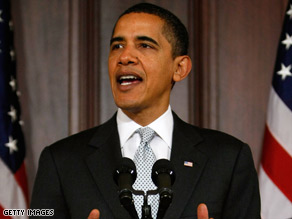 President Obama says his tax cut will give $120 billion to 120 million American families.

"My administration has taken far-reaching action to give tax cuts to the Americans who need them while jump-starting growth and job creation in the process," Obama said. "We start from the simple premise that we should reduce the tax burden on working people, while helping Americans go to college, own a home, raise a family, start a business and save for retirement. Those goals are the foundation of the American Dream, and they are the focus of my tax policy."

Appearing with the president on the national tax filing deadline were families affected by the economic downturn.

"Across America, families like the folks who have joined me here today have had tough choices forced upon them," Obama said. "Many have lost a job or are fighting to keep their business open. Many more are struggling to make payments, to stay in their home or to pursue a college education.

"These Americans are the backbone of our economy, the backbone of our middle class. ... They need a government that is working to create jobs and opportunity for them, rather than simply giving more and more to those at the very top in the false hope that wealth automatically trickles down."

Taxes historically are a tough issue for Democrats. Obama has managed to fend off the traditional "tax and spend" label. Conservatives, however, are trying to reattach it through "tea party" protests held throughout the nation Wednesday.

"It's time for Washington Democrats to listen to the American people who have had enough and work with Republicans on common sense solutions to get our economy moving again -- without raising taxes," he said.

Obama called his tax cut the most progressive in modern history, saying it will affect 120 million families and put $120 billion directly into their pockets.

"This is going to boost demand, and it will save or create over half a million jobs," he said. It will lift more than 2 million Americans out of poverty, he added.

The president pledged to help small businesses stay open by allowing them to offset their losses against income they from the past five years, rather than the previous two.

"This could provide a record number of refunds for small businesses, which will provide them with the lifeline that they need to maintain inventory and pay their workers," he said.

Obama said he'll simplify the college loan process, adding that a $2,500 tax credit for all four years of college will help raise the number of American college graduates.

In addition, the $8,000 tax credit for first-time homebuyers will "put a home within reach for hard-working Americans who are playing by the rules and making responsible choices," he said.

Some of the people joining him have used the credit, Obama noted, saying he was pleased that it has already been of use to some Americans.

The president noted, however, that "tax relief must be joined with fiscal discipline. Americans are making hard choices in their budgets, and we've got to tighten our belts in Washington as well."

The administration has identified $2 trillion in deficit reductions over the next decade, he said, and "we're cutting programs that don't work, contracts that aren't fair and spending that we don't need."

He pledged to stop giving tax breaks to companies that outsource jobs overseas or stash profits there, to help stimulate U.S. job creation.

He noted that it will "take time to undo the damage of years of carve-outs and loopholes."

As for the tax code, he said, "I've started by asking Paul Volcker and my Economic Recovery Board to do a thorough review of how to simplify our tax code and to report back to me by the end of the year. ... I want every American to know that we will rewrite the tax code so that it puts your interests over any special interest. And we will make it quicker, easier and less expensive for you to file a return, so that April 15 is not a date that is approached with dread every year."

Sixty-two percent of Americans responding to a CNN/Opinion Research Corp. poll last month said they approved of how Obama is handling taxes.