WASHINGTON (CNN) -- The "border czar" named Wednesday to help deal with drug cartel violence along the U.S.-Mexico border held a similar post in the Clinton administration. 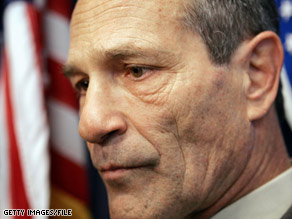 Alan Bersin was the attorney general's Southwest border representative in the Clinton administration.

The move comes on the eve of President Obama's first visit to Mexico since being sworn into office. He will be in the nation Thursday to meet with President Felipe Calderon on his way to Trinidad and Tobago for the Summit of the Americas.

In the Clinton administration, Bersin, 62, was the attorney general's Southwest border representative. He held that post while also serving as U.S. attorney for the Southern District of California.

He also is a former California secretary of education, superintendent of San Diego City Schools and practicing private attorney.

Bersin has stellar academic credentials, having been accepted into the Phi Beta Kappa National Honor Society while receiving a bachelor's degree in government from Harvard University, attending Oxford University as a Rhodes Scholar and receiving a law degree from Yale.

CNN's Ed Henry and Jeanne Meserve contributed to this report.

All About Border Control and Customs • Mexico