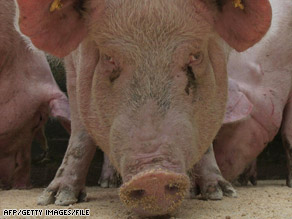 Research on swine odor is one of the projects listed in the "Pig Book," released Tuesday.

Citizens Against Government Waste is out with its annual "Pig Book" -- a list of lawmakers whom the group considers the most egregious porkers, members of the House and Senate who use the earmarking process to funnel money to projects on their home turf.

"In fiscal year 2009, Congress stuffed 10,160 projects into the 12 appropriations bills worth $19.6 billion," the group said in a report released Tuesday. The amount marks a 14 percent increase over 2008.

The "Pig Book" also names dozens of what it considers the most blatant examples of pork-barrel spending.

"Despite repeated claims by members of Congress that earmarks have been reduced, the Pig Book belies that claim."

Included in the funding is $3.8 million for the Old Tiger Stadium Conservancy -- a group dedicated to finding a new use for the stadium that the Detroit Tigers baseball team played in from 1896 through 1999.

An additional $1.9 million went to the Pleasure Beach water taxi service project in Bridgeport, Connecticut, requested by then-Rep. Chris Shays. A bridge fire more than a decade ago means beach-goers have to travel a couple of extra miles to get to the beach.

Alaska led the nation in pork per capita, at $322 a person. At the bottom of the list was Arizona, with less than $12 per resident. Sen. John McCain does not request earmarks for his home state.

See where each state ranks »

Mississippi Sen. Thad Cochran, the ranking Republican on the Senate Appropriations Committee, topped the list of senators receiving earmarks, with a total of $653 million.

The chairman of the Senate Appropriations Committee, Sen. Daniel Inouye, D-Hawaii, was second, with $445 million.

"Sen. Reid is fond of saying that earmarks have been around since we were a country. Now he must be blaming it on the dinosaurs," Schatz said.

Some recipients of the earmarks disagreed with the characterization of their projects as "pork."

Kathleen Wendler, a member of the Old Tiger Stadium Conservancy's board of directors, argued that the $3.8 million dedicated to the old ballpark was critical to revitalizing the surrounding Detroit neighborhood.

The money "is not pork at all," she said. The ballpark, if properly utilized, can be an "economic development generator for the local business district. This project will help draw younger people into the neighborhood. It will help save the neighborhood in the long run."

To qualify for the "Pig Book," a project must meet at least one of these standards: It was requested by only one chamber of Congress; was not specifically authorized; was not competitively awarded; was not requested by the president; greatly exceeded the president's budget request or the previous year's funding; was not the subject of congressional hearings; or served only a local or special interest.

All About U.S. House of Representatives • U.S. Senate • John McCain