WASHINGTON (CNN) -- When presidents are new, first impressions really count: Your demeanor (shirtsleeves, not jackets, in the Oval Office), your stature (move over, Mr. Sarkozy) and, of course, your plans for America's future (not to mention your plans for our 401(k)s). 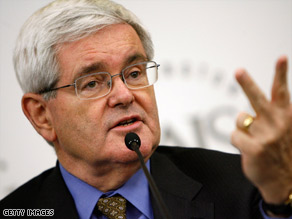 Since President Obama's presidential bid was a very long affair -- and since his predecessor left with a 28 percent approval rating -- he came into office with an advantage. Americans figured they knew him and they surely liked him better than the previous guy.

And they understood he was persistent: After all, he was the underdog who beat the once-presumptive nominee, Hillary Clinton. And, by the way, he also gave great speeches.

But new presidents are always tested, as Joe Biden famously predicted. But not just on one front, on all fronts. And Obama has had more than his share, as he likes to remind us -- an economic crisis that threatened to take down the economy; a North Korean nuclear crisis.

And finally, the pirates of Somalia -- threatening an American crew -- hold an American captain hostage. A high-stakes, visible, compelling story, with inevitable winners and losers.

That's when you learn about a president.

The president played it cool -- in fact, pitch-perfect -- as it turns out. We now know that while he was saying little in public, he was completely engaged. He sent his secretary of state to warn the pirates publicly -- while the president privately held more than 17 briefings on the matter and made sure the bureaucrats at all agencies were working together (no small task).

And finally, he gave an unambiguous order -- to shoot if the captain's life was in peril.

And when it was all over, as a top administration official told me, Obama "didn't wrap himself around the bravery of those military seals."

Indeed, he commended the captain, the SEALs, called for multilateral efforts to stop piracy -- and went on the next day to give an economic speech. Indeed, this aide adds, "He's not about to put on a flight suit on an aircraft carrier and declare mission accomplished."

Not his style, they say.

But what about the style of say, Newt Gingrich? The former House Speaker -- often mentioned as a possible presidential contender in 2012 -- decided to Twitter his inner thoughts on the pirates in real-time.

Last Saturday: "Obama is making a major mistake in not forcefully outlining the rules of civilization for dealing with pirates. We look weak."

By Monday, after the safe rescue of the captain, Gingrich was, er, a tad more laudatory: "The Navy seals did exactly the right thing in rescuing the American captain. President Obama did the right thing in allowing the Navy to act."

A grudging kudo, if there ever was one.

Would it have been better if the president of the United States had publicly engaged with a bunch of teenage thug pirates? It's beneath Obama's pay grade and dignity -- not to mention how it would have added fuel to an already incendiary situation.

So how about just admitting that the administration performed admirably in this crisis?

Here's the problem: If Republicans can't allow that the president did his job well in this unambiguous case, why should we believe their complaints about anything else? If they can't pat him on the back for this one, why should we even listen to their arguments about the budget, about health care, about energy?

If Republicans want Americans to see their arguments as credible -- as they may well be -- they need to present themselves as the credible opposition.

Good first impressions count for them, too. And so far, Republicans are Twittering them away.