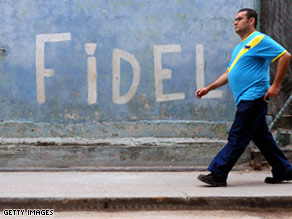 Fidel Castro led Cuba's communist revolution in 1959 and recently handed over power to his brother Raul.

According to the CNN/Opinion Research Corp. poll conducted April 3 to 5, 64 percent of the 1,023 Americans surveyed by telephone thought the U.S. government should allow citizens to travel to Cuba.

And 71 percent of those polled said that the U.S. should reestablish diplomatic relations with Cuba, while 27 percent opposed such a move.

Both questions had a sampling error of plus or minus 3 percentage points.

The Obama administration has signaled that new rules on family travel and remittances to Cuba may be announced before President Obama goes to the Summit of the Americas on April 17.

A delegation from the Congressional Black Caucus traveled to Cuba earlier this week to find out if Cuba was interested in resuming relations with the U.S., said Rep. Barbara Lee, D-California, a member of the delegation.

"We have to remember that every country in Latin America, 15 countries, have normal relations with Cuba," Lee said. "We're the country which is isolated."

Lee said that Cuba has no preconditions on resuming relations.

The trip prompted a pair of Republican congressmen to rip the Black Caucus members for ignoring Cuba's "myriad gross human rights abuses," saying the trip to the island nation ignored the plight of political prisoners under the Castro regime.

Reps. Chris Smith of New Jersey and Frank Wolf of Virginia also urged the Obama administration to refrain from easing trade embargo or travel restrictions until the Cuban government releases all "prisoners of conscience," shows greater respect for freedom of religion and speech, and holds "free and fair" elections.

Cuban-American members of Congress, regardless of party affiliation, have voiced outrage over the easing of relations.

Obama has said he is in favor of changing the relationship with Cuba. The $410 billion budget Obama signed in March makes it easier for Cuban-Americans to travel to Cuba and to send money to family members on the island. It could also allow the sale of agricultural and pharmaceutical products to Cuba.

U.S. citizens are allowed to visit Cuba, but must apply for special licenses to do so. Though it is illegal, some citizens travel to a third country like Mexico or Canada and then into Cuba.