WASHINGTON (CNN) -- In a dramatic break from previous policy, the United States will join direct talks between U.N. and European powers and Iran over Tehran's nuclear program, the State Department announced Wednesday. 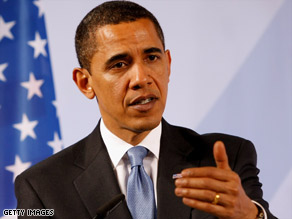 Wednesday's announcement is the latest step by the Obama administration to engage Iran diplomatically.

"If Iran accepts, we hope this will be an occasion to seriously engage Iran of how to break the logjam of recent years and work in a cooperative manner to resolve the outstanding international concerns about its nuclear program," Wood said.

Iran so far has refused Security Council demands to halt its production of enriched uranium, which it has said will be used to fuel nuclear power plants. The United States has accused Tehran of concealing efforts to develop a nuclear bomb, and the U.N.'s nuclear watchdog agency said it has failed to resolve questions about the aim of Iranian program.

The Bush administration had insisted that Iran first stop its nuclear program before any talks with the United States or its allies could go forward. Wednesday's announcement is the latest step in the Obama administration's efforts to engage the Islamic republic diplomatically after nearly three decades without formal ties.

U.S. Secretary of State Hillary Clinton, briefly addressing the administration's decision Wednesday, told reporters that "pursuing very careful engagement on a range of issues that affect our interests and the interests of the world with Iran makes sense."

"And there's nothing more important than trying to convince Iran to cease its efforts to obtain a nuclear weapon," Clinton said at the State Department, where she was meeting Panama's foreign affairs minister. Her comments came in response to a reporter's question about engaging Iran.

Washington, which has not had diplomatic relations with Iran since 1980, has participated in previous talks only as an observer. Wood would not speculate about whether a meeting involving Iran and the rest of the group might lead to direct one-on-one meetings of U.S. and Iranian officials.

"It's a little early to talk about that right now," he said.

Iran has so far responded coolly to the American overtures. In a statement carried on Iranian state television Wednesday evening, Iranian President Mahmoud Ahmadinejad said Washington "has no right to suggest how other nations should live."

"Those who have nuclear bombs are backward nations, because the time for threats is over," Ahmadinejad said.

And in a statement carried by the official IRNA news agency, Ahmadinejad said Iran was "ready to cooperate" toward nuclear disarmament, as long as those efforts did not create obstacles for countries that wish to produce nuclear fuel for civilian power.

No date has been set for the next meeting of the "P-5 plus 1" group, which includes the five Security Council permanent members -- the United States, Britain, France, Russia and China -- as well as Germany. But Wednesday's announcement comes amidst a variety of signals from both sides that a major diplomatic shift was in the winds.

In March, President Obama delivered a televised message to the Iranian people offering new diplomatic engagement. And Clinton sat down with an Iranian official at a recent conference in the Netherlands on Afghanistan, but the two diplomats had no one-on-one contact.

During his presidential campaign, Obama called for talks with Iran without pre-conditions -- a proposal sharply criticized by Clinton, then his chief opponent for the Democratic nomination, among others.

Big obstacles to a U.S.-Iranian thaw remain, including reports from Tehran on Wednesday that Iranian authorities have charged an American journalist with espionage. Clinton told reporters that the the U.S. had asked the Swiss -- who represent U.S. interests in Iran -- for up-to-date information about Roxana Saberi, who has been jailed for nearly three months.

During the March 31 meeting in the Netherlands, the United States delivered a note to Iran that asked for a response on the status of Saberi and American citizens detained or missing in Iran. U.S. officials say they are still awaiting a response from the Iranians to the note.