WASHINGTON (CNN) -- A federal judge on Tuesday set aside the conviction of Republican former Sen. Ted Stevens while excoriating the case's prosecutors. 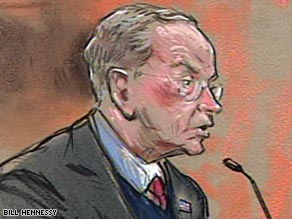 A courtroom sketch shows ex- Alaska Sen. Ted Stevens at Tuesday proceedings, where he said he had "new hope."

"In nearly 25 years on the bench, I've never seen anything approaching the mishandling and misconduct that I've seen in this case," Sullivan said.

In October, Stevens was found guilty of seven counts of lying on Senate ethics forms. He lost his bid for re-election in November to Democratic challenger Mark Begich, then mayor of Anchorage.

In December, an unnamed FBI whistle-blower accused prosecutors of withholding evidence from the defense. The whistle-blower reported that someone with the government had an inappropriate relationship with Bill Allen, an oil industry executive who was the government's key witness.

In a dismissal motion filed Wednesday, the Justice Department acknowledged that Stevens was not given access to the notes taken by prosecutors during an April 2008 interview with Allen.

The notes show that responses by Allen were inconsistent with testimony he gave against Stevens and that information from the interview could have benefited Stevens at trial, according to the motion.

"When we were finally given [the notes], you might have thought my reaction would be to celebrate, do high-fives, that we were right," Brendan Sullivan, an attorney for Stevens, said Tuesday. "It was not like that at all. I was sick to my stomach. How could they do that? Then my revulsion turned to rage, silent rage for a number of days."

"In light of this conclusion, and in consideration of the totality of the circumstances of this particular case, I have determined that it is in the interest of justice to dismiss the indictment and not proceed with a new trial," Attorney General Eric Holder said in a statement last week.

"If I were Sen. [Robert] Byrd, I'd say 'hallelujah,' " a triumphant Stevens said after leaving the courthouse Tuesday.

Stevens maintained his innocence throughout a government investigation that led to an indictment and conviction for failing to disclose hundreds of thousands of dollars of "freebies" from an oilfield services company on Senate ethics forms.

In a statement read to the court Tuesday, Stevens said that his faith in the justice system had been restored.

"Until recently, my faith in the criminal justice system was unwavering. But what some members of this prosecution team did nearly destroyed my faith. Their conduct has consequences they must know can never be reversed," he said.

"But [I now have] new hope that others may be spared from similar miscarriages of justice."

Stevens added that he would "encourage the enactment of legislation to reform laws relating to the responsibilities and duties of those entrusted with the solemn task of enforcing federal criminal laws."

Paul O'Brien, one of the new government attorneys assigned to the case, made no attempt to the justify the conduct of the previous prosecution team. "We deeply regret this occurred," he said. "We apologize to the court."

In issuing his ruling, Sullivan noted the Justice Department's investigation into potential misconduct by government prosecutors had gone on for six months with no result.

"The silence is deafening," Sullivan said.

See what the reversal means for the Justice Department »

The judge previously had excoriated prosecutors during the trial and held the prosecution in contempt at one point.

One of Stevens' longtime friends, Sen. Orrin Hatch of Utah, said last weekend that Stevens was "screwed by our own Justice Department."

Hatch praised Holder for "standing up and fixing this foul situation."

"I think he's more than shown integrity and decency in this matter, and it's not an easy thing for him to do that," Hatch said. "He has, in looking at it, realized now what people like myself have been saying is 100 percent right."

In the days that followed the Justice Department's dismissal motion, Alaska state Republican leaders, including Gov. Sarah Palin, called on Begich to step down and allow a rematch without what has been called the "taint" of a criminal case against Stevens.

"There's no way [Stevens] can just 'put this behind him' as some have suggested he should," Palin said in a statement released Tuesday.

Begich, while indicating his support for a special prosecutor to investigate the botched prosecution, stated that he intends to serve his six-year term.