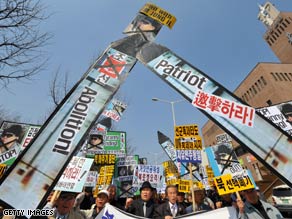 Activists carry paper missiles and portraits of North Korean leader Kim Jong-Il at a rally in Seoul on April 2.

But at the same time, the United States is carefully avoiding any suggestion that it would try to disrupt the launch and is being vague about what Secretary of State Hillary Clinton and others have said the "consequences" of the launch would be.

Behind the U.S. tightrope act is the United States' hope of handling the situation in a way that will not endanger the six-party talks aimed at dismantling and eventually erasing North Korea's nuclear weapons program, a senior administration official told CNN on Thursday.

The official said the North Koreans have pretty much backed themselves into a corner. While they may have begun the process of threatening to launch a rocket to gain leverage with the United States, it is now an issue of saving face -- and they are certain to go ahead with the launch.

Watch what the repercussions of a launch would be »

They recognize there will be a strong reaction at the United Nations, but have no choice at this point, the official said.

The diplomacy involved is very delicate, the official noted. All of the other countries involved in the six-party talks agree a launch would be bad, but Russia and China are less eager to impose sanctions while South Korea and Japan want to be much tougher. So the United States has to stake out a middle position and be patient, the official said.

The United States wants to handle the situation so that after the launch -- and an appropriate period of criticism of North Korea -- the six-party talks will be resumed, the official said.

"We are not going to take our eye off the ball or let them distract us from the goal, which is denuclearization," the official said. "We really believe that is the best way to take care of the issue and we think we can get it if we keep working with the North Koreans. At some point it is a war of attrition and we will continue to wear them down."

The official noted that the launch "would be a provocative act. We don't want to dismiss it or take it lightly and it would be dealt with seriously. But we can't take our eyes off the prize."

Secretary of State Hillary Clinton said much the same a few weeks ago -- launch or no launch, the United States wants to continue the six-party talks.

The official speculated that the North Koreans have been shying away from U.S. efforts at engagement out of fear that a better relationship with the United States and more openness to the world could put the regime at risk.

In addition, this official said, the North Koreans are keeping a close eye on what is happening between the United States and Iran.

With that behind-the-scenes maneuvering as a backdrop, Wood, at his midday State Department briefing Thursday, urged North Korean leaders to rethink their course.

"We call on the North to desist from launching any type of missile. It would be counterproductive, it's provocative, it further enflames tensions in the region," he said . "We want to see the North get back to the six-party framework and focus on denuclearization."

Wood would not answer questions about whether the United States is poised to go to the United Nations to seek retaliatory sanctions against North Korea if it goes through with the launch.

"Let's see if this test happens. We certainly hope it doesn't. Again, we call on the North [North Korea] not to do it. But certainly, if that test does go forward we will be having discussions with our allies," Wood said.

"The situation right now in the region is very tense. Everyone is on edge and we want to try to do what we can to prevent this launch from happening," he added. "And we are using every possible avenue that we have diplomatically to do that."

North Korea said the the rocket will carry a satellite into orbit.

The United States and other countries fear the main purpose of the launch, regardless of the payload, is to allow North Korea to gain valuable information about improving its ballistic missile program.

Japan recently mobilized its missile defense system in response to the planned launch. Japanese officials said the move is aimed at shooting down any debris from the launch that might fall into Japanese territory.

"All three of them agreed to approach the issue in a calm manner as it develops," Whitman said.

He would not discuss other details of the calls and would not say if Gates offered to assist Japan in shooting down debris from the missile if it was to endanger Japan.