No winner yet in New York congressional race

(CNN) -- With no winner yet in Tuesday's special election for New York's 20th Congressional District, both Democrats and Republicans are trying to project confidence -- and lower expectations. 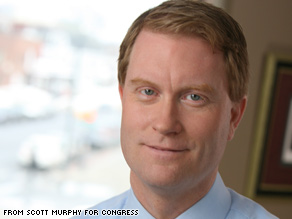 As of Wednesday afternoon, Democrat Scott Murphy led Republican Jim Tedisco by 25 votes out of more than 150,000 ballots cast, according to unofficial election results.

It could take up to two weeks for a winner to be announced.

The Missouri-born Murphy, 39, is a millionaire venture capitalist. Tedisco, 58, is a longtime New York state lawmaker and ranking Republican in the State Assembly. They're running to replace Democrat Kirsten Gillibrand, who gave up her House seat after being appointed to succeed Hillary Clinton in the Senate.

Regardless of who wins the special election, Democrats will still hold a large majority in the House of Representatives. But what usually would have been a local contest with little national interest evolved into an early referendum on President Obama and his polices to jump-start the economy, and the reputations of the Democratic and Republican parties as they and their congressional committees poured money and resources into the race.

Both parties publicly remain confident their candidate will win.

"When all the ballots are counted, I'll be proud to escort Jim Tedisco down the center aisle of the House to be sworn in as our newest member," House Minority Leader John Boehner, R-Ohio, said Wednesday morning.

Both parties also are trying to paint the district as a stronghold of the opposition.

"Scott's performance tonight in an overwhelmingly Republican district, where Republicans enjoy a registration advantage over Democrats of more than 70,000, represents a repudiation of the failed politics and policies that Republicans continue to embrace," said Virginia Gov. Tim Kaine, chairman of the Democratic National Committee, in an e-mail Tuesday night to supporters.

Republican National Committee Chairman Michael Steele shot back, saying in an e-mail to supporters that "President Obama, Sen. Clinton, [former New York Gov.] Eliot Spitzer and [Sen.] Chuck Schumer all won this district, and a Democrat won the last two congressional races. The fact we are in a dead heat race in NY-20 means we are making progress as a party standing firm for fiscal responsibility."

The 20th is a moderate to conservative district that Republicans dominated on the congressional level for decades. Gillibrand first won the seat in 2006 and easily was re-elected in November.

Registered Republicans outnumber Democrats in the district by around 70,000, but George W. Bush's 2000 and 2004 wins there were narrow, and Obama edged out Sen. John McCain in last year's presidential election.

Both parties on Wednesday rushed out fund-raising e-mails to supporters.

But according to court documents, state Republicans filed a lawsuit Tuesday night to have all the absentee ballots impounded. They said the move, not unusual in close contests, is to ensure accuracy.

The Democratic Congressional Campaign Committee responded in an e-mail, saying, "Our Republican counterparts outrageously accused Democrats of trying to steal the election. Our legal team is already on the ground fighting back, but we need urgent funds to help cover the costs."