Obama talks up his budget to House Democrats

WASHINGTON (CNN) -- President Obama made a strong pitch for his budget to House Democrats in a closed-door meeting on Monday night, arguing that the budget includes key components to turning around the ailing economy, according to several Democratic sources who took verbatim notes in the meeting. 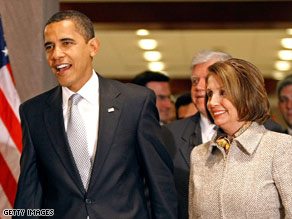 President Obama met with Speaker Nancy Pelosi and other House Democrats Tuesday to pitch his budget.

Emphasizing that voting for the measure also was good politics for Democrats on the Hill, the president told members, "I need your vote in passing the budget. If we do that, we will create a sense of momentum that will allow us to do health-care reform and education."

But he warned, "If we don't pass the budget, it will empower those critics who don't want to see anything getting done," according to the sources.

Two Democratic House leadership aides also said Obama made a political case to members that they need to stay united to support his major agenda items, and now is the time to press for them.

The president said, "We are all in this together," and warned Democrats they will not be able to separate themselves from him or Democratic leaders such as Speaker Nancy Pelosi. Gesturing to the House Democratic leaders at the meeting, Obama said, "If you think that you're going to run away from us, I'm sorry, that's not the way it works."

Those aides noted the president acknowledged that the bad economic situation could present Democrats as the majority party with a tough election fight next cycle. But he argued that working together to pass major initiatives such as those in the budget was the best strategy for showing voters that they are acting on solutions to major challenges facing the country.

The House and Senate are both voting on the budget later this week.

Pelosi told reporters after the meeting, "Yes, we will pass a budget this week." But leadership aides admit that there are still some undecided House Democrats, and they are still working to secure the votes.

One leadership aide said getting a push from the popular president was part of the whip operation. "He's our closer. He always will be," the aide said, referring to Obama.

In the session Monday night, Obama acknowledged that the size of the deficit was one argument that critics raised to oppose his policies. According to several Democratic sources, he said, "I'm serious as a heart attack about going after it."

And in his opening remarks, the president refuted the argument that it the economic downturn was a reason not to make major investments in health care, energy and education, saying, "The only way to get out of the economic mess we are in is to grow our way out of it. If we do not have growth, we will not succeed."

The president fielded eight questions during the session on a range of issues, including farm subsidies, foreign aid, and finding a way for banks to get rid of toxic assets.

According to a senior leadership aide, when Rep. Peter DeFazio, D-Oregon, got up to urge the president to devote more money for infrastructure projects -- noting he had voted against the economic stimulus bill because he thought it fell short in this area -- Obama said he was well aware of DeFazio's vote against the measure and joked, "Don't think we're not keeping score, brother."