WASHINGTON (CNN) -- Despite crushing defeats in the last two elections, Senate Republicans have new "energy and enthusiasm" for winning back the majority, according to their leader, Sen. Mitch McConnell of Kentucky. 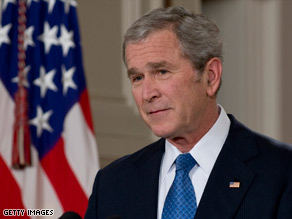 A top GOP leader says George W. Bush, politically, was a "millstone" around the GOP's neck.

"President Bush had become extremely unpopular, and politically he was sort of a millstone around our necks in both '06 and '08," McConnell told reporters Friday. "We now have the opportunity to be on offense, offer our own ideas and we will win some."

Many of those ideas get presented as amendments to Democratic bills, and even though they're usually defeated, they can draw attention to GOP policy alternatives and force Democrats to take difficult votes.

"They become the way you chart the course for a comeback, which, in this country, always happens at some point," McConnell said. "The pendulum swings."

McConnell said many of the ideas for amendments come from conservative think tanks and other Republican thinkers off Capitol Hill.

McConnell also said he doesn't mind the "party of no" label Congressional Democrats and the White House give Republicans.

"I don't feel anyone should be apologetic for opposing a bad idea," McConnell said. "I'm not fearful of an effort to demonize dissent."

After being labeled by Democrats the "party of no" for criticizing the budget without offering solutions, House Republicans said Thursday that they have come up with a plan B -- though were later criticized for a lack of details.

"Two nights ago, the president said, 'We haven't seen a budget yet out of Republicans.' Well, it's just not true, because here it is, Mr. President," House Minority leader Rep. John Boehner said Wednesday as he held up a booklet that he said was a "blueprint for where we're going."

The blueprint includes familiar Republican proposals to limit "wasteful" government spending, cut the size of government and provide incentives to private entities to expand access to health care. It also includes a major overhaul of the tax code, proposing a marginal tax rate of 10 percent for income up to $100,000 and 25 percent for any income above that level.

White House Press Secretary Robert Gibbs laughed off the Republicans' proposal Thursday, joking that their blueprint has more pictures of windmills than charts.

CNN contributor Paul Begala says that Republicans are simply out of ideas -- and have no one to blame but themselves.

"The Republicans are like an arsonist who complains that the fire department is wasting water. Obama is trying to handle an immediate crisis while also laying the foundation for long-term growth. The Republicans are doing neither," Begala said. "They have no plan to stop the loss of jobs or to get capital markets functioning properly -- and they certainly have no plans for health care, education or energy, which are the keys to both long-term economic growth and long-term deficit reduction."

Begala added: "If this were 'Sesame Street,' the announcer would be saying, 'This program brought to you by the letters G, O and P ... None of the crises the president is addressing were of his creation. All of them were created or worsened by the Republicans who ran the House of Representatives, Senate and White House for years."