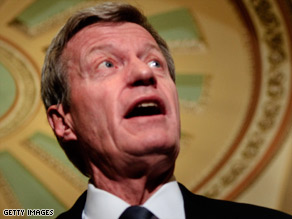 In response to the criticism, Senate Finance Committee Chairman Max Baucus, D-Montana, who angrily denounced the AIG bonuses last week, said he's been talking to White House officials and to other senators about changing the bill he introduced just Friday.

"I want to hear what senators have to say. A lot are weighing in now with different ideas," Baucus said. "Some are tax. Some are regulatory. But they're still all addressing bonuses."

Baucus said he does not know when his bill -- which appeared to be on a fast track last week -- will be considered by the Senate.

On Sunday, President Obama said on the CBS News program "60 Minutes" that, "You don't want to be passing laws that are just targeting a handful of individuals."

Democratic sources told CNN that statement was a subtle public warning that was privately delivered to Senate Democrats in a much more direct way.

Sources said top Obama officials argued behind the scenes against eliminating the bonuses with a stiff tax because it might not be constitutional and because it might deter companies from participating in the government's rescue attempt of the banking industry.

But sources also say some Democrats are reluctant to bend to White House pressure after seeing the public beating Sen. Chris Dodd, D-Connecticut, took last week after acknowledging he agreed to an administration request to change the bonus restriction.

Asked about the president's concerns, the principal Republican supporter of the tax legislation criticized Obama.

"We wouldn't be using the tax code if he had been on top of things and kept the bonuses from going out in the first place," said Sen. Chuck Grassley, R- Iowa.

"I think the special interests the president says he's been fighting are raising their ugly head, and he's submitting to them."