(CNN) -- Fallout from anger over AIG's bonuses is following Sen. Chris Dodd from Washington back home to Connecticut. 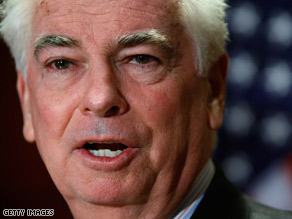 Sen. Chris Dodd says if he does his job, "the politics will take care of itself."

In an example of Dodd's new uncomfortable political reality, what was supposed to be a media event to tout federal funding for emergency communications equipment for Enfield, Connecticut's police and fire departments turned into something very different.

When it came time for questions, the only questions reporters had for the Democratic senator concerned his role in the handing out of AIG bonuses.

The big question is whether the Senate Banking Committee chairman's involvement will make him politically vulnerable next year when he faces re-election.

At the Enfield event Friday, Dodd said that he was misled on the issue of bonuses for AIG executives. He said he would not have drafted key legislative changes allowing the bonuses to move forward if he knew the purpose of those changes.

Dodd said officials at the Treasury Department led him to believe that the changes, added to the $787 billion economic stimulus bill shortly before its passage last month, were merely "technical and innocuous" in nature.

"If anyone had mentioned AIG or any bonuses, I would have rejected it immediately, out of hand. But the argument was this was technical," Dodd said.

Dodd said he was disappointed that the Treasury officials who asked him to make the legislative changes had not identified themselves.

Watch why some are accusing Dodd of flip-flopping »

People are incensed over the bonuses handed out to executives at AIG and elsewhere, Dodd said. "I don't blame them ... No one is angrier than I am."

Public outrage has exploded over $165 million worth of bonuses given out by the insurance giant at a time when the company is being bailed out with taxpayer money.

Dodd told CNN on Wednesday that he was responsible for language added to the stimulus bill to make sure that existing contracts for bonuses at companies receiving federal bailout money were honored.

Dodd initially denied that he had anything to do with the language that AIG used to justify paying out millions in bonuses.

On Thursday, the House of Representatives passed legislation to try to recoup the bonuses. The measure would tax individuals on any bonuses received in 2009 from companies getting $5 billion or more in money from the Troubled Asset Relief Program. Bonuses for people with incomes over $250,000 would be taxed at a 90 percent rate.

"In a sense I am now being blamed for having tried to do something, and accepted a technical change," said Dodd.

"But I'm glad I led on the issue. And I still will continue to do so. And it began last fall during the first legislation on this area. Now people are going to make what they want out of it politically," Dodd said.

"But I have enough faith. I've been through eight elections in this state. And people are smarter than the politicians give them credit for. And they can see through politics."

But some Democrats are worried how this will affect their long-time senator.

"I felt very sorry for him, but I feel that it probably could be the end of his political career," said Democrat Grace Darling, at Peppe's Pizza in New Haven.

"As a Democrat, you hate to see someone lose their seat, but I'd have to see who's running against him," said another patron, John Piurek.

One candidate is former Republican Rep. Rob Simmons, who announced this week that he'll challenge Dodd next year.

Simmons sees an opening, saying that Dodd "failed in his oversight responsibilities. I think the papers and everybody else have got it right. It's a flip-flop."

Simmons doesn't even have a campaign office, but a Quinnipiac University poll taken before the AIG flap shows him with a 1 point lead over Dodd.

"Dodd has to be concerned because he's under 50 percent against a former congressman who's not that well-known outside of his former district," said Quinnipiac Polling Director Doug Schwartz.

The Republican National Committee slammed Dodd Friday in a Web video that highlights the senator's inserted language on the AIG bonuses. The RNC is also trying to cash in by sending out national fundraising solicitations.

The GOP says Dodd concentrated in 2007 on running for the Democratic presidential nomination when he should have concentrated on his duties as Banking Committee chairman.

Republicans mention an ethics panel investigation into discount mortgages Dodd allegedly received from Countrywide Financial Corp., a big lending company in the middle of the home foreclosure crisis. Dodd says he was unaware of the discounts.

"We intend to hold Sen. Dodd accountable for his record in what is shaping up to be an extremely competitive race in a traditionally blue state," said NRSC spokeswoman Amber Wilkerson.

"Sen. Dodd is the one who has led the fight against excessive executive compensation, often over the objections of many of his Republican colleagues.

"The people of Connecticut know he's been a leader on this issue, and any attempt to make him responsible for what happened at AIG is an absurd political cheap shot that won't ring true to anyone even remotely familiar with his strong record on curbing excessive pay," DSCC Communications Director Eric Schultz said.

"I know I've been targeted. When you get Dick Cheney and Karl Rove and Rush Limbaugh all talking about you in the same day, it isn't coincidental. As I said, I was born at night, but not last night," Dodd said.

He acknowledges he'd like better poll numbers, but says he thinks people will see through the political point scoring.

"I have enough confidence in them that if I do my job on their behalf, which is what they're interested in, about their jobs, their homes, their retirement, their kids' future, then the politics will take care of itself."

All About Christopher Dodd • American International Group Inc. • U.S. Department of the Treasury