(CNN) -- Senate Banking committee Chairman Christopher Dodd told CNN Wednesday that he was responsible for language added to the federal stimulus bill to make sure that already-existing contracts for bonuses at companies receiving federal bailout money were honored. 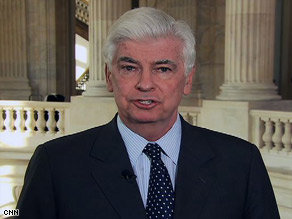 Dodd, a Democrat, told CNN's Dana Bash and Wolf Blitzer that Obama administration officials pushed for the language to an amendment designed to limit bonuses and "golden parachutes" at those companies.

"The administration had expressed reservations," Dodd said. "They asked for modifications. The alternative was losing the amendment entirely."

On Tuesday, Dodd denied to CNN that he had anything to do with adding the language, which has been used by officials at bailed-out insurance giant AIG to justify paying millions of dollars in bonuses to executives after receiving federal money.

Dodd said he did not speak to high-ranking administration officials and the change came after his staff spoke with staffers from Treasury.

The White House did not immediately respond to CNN's request for comment.

At a town hall meeting in Costa Mesa, California, about an hour after Dodd spoke, President Barack Obama didn't directly address the language change -- but said he'll take responsibility for the bonuses being awarded.

"We didn't draft these contracts. We've got a lot on our plate. But it is appropriate when you're in charge to make sure stuff doesn't happen like this," he said. "So we're going to do everything that we can to fix it."

Dodd said later Wednesday in a written statement that his amendment allows the Treasury Department to review bonus contracts like AIG's and seek ways to get the money back for taxpayers.

AIG's derivatives branch is in Dodd's home state. Many of the bonuses in question were awarded to executives at that branch. But in the written statement, Dodd said he had no idea the legislation would impact the company.

According to a transcript of the Tuesday interview, Dodd was asked about an executive-compensation provision "that exempts everything prior to February 11, 2009 -- any contracts prior to that date."

Asked whether he had later been able to figure out who added the language, he said, "I really don't know."

"We have to continue managing our business as a business -- taking account of the cold realities of competition for customers, for revenues and for employees," Liddy told a House Financial Services subcommittee. "Because of this, and because of certain legal obligations, AIG has recently made a set of compensation payments, some of which I find distasteful."

Pennsylvania Rep. Paul Kanjorski, the hearing's chairman, responded to Liddy's statement by arguing that AIG should have refused to pay all the bonuses -- regardless of its contractual obligations with the bonus recipients.

"Let them sue us," said Kanjorski, a Democrat.

Liddy, who joined AIG after the bailout, said some employees have returned bonus money.

Senators and representatives have vowed to get the bonus money back, but questions have arisen about why Congress didn't act to prevent the bonuses in the first place.

"Well, the only lever we have in this is the fact that these corporations have come to the Congress of the United States and want a taxpayers' bailout," Sen. Chuck Grassley, R-Iowa, said Wednesday on CNN's "American Morning."

AIG, an ailing insurance giant, has received more than $170 billion in federal assistance. Taxpayers now own nearly 80 percent of the company.

In a letter to Congress on Tuesday, New York Attorney General Andrew Cuomo confirmed that AIG paid 73 employees bonuses of more than $1 million each this year after it received federal bailout money.

AIG will have to return the $165 million it paid in executive bonuses to the Treasury Department, Treasury Secretary Timothy Geithner said Tuesday.

Grassley and Sen. Max Baucus, D-Montana, on Tuesday introduced a plan that would impose a hefty tax on retention bonuses paid to executives of companies that received federal bailout money or in which the United States has an equity interest.

Watch Grassley describe how the tax would work »

Other lawmakers, such as Rep. Charlie Rangel, D-New York, said it would be unfair to use the tax code as punishment, but Grassley said it's not a question of being fair.

"It's unfair what they did to the taxpayers by paying bonuses when they don't have the money to pay bonuses," he said. iReport.com: Sound off on AIG

Rep. Barney Frank, D-Massachusetts, said Wednesday that Congress can't just pass a law to abrogate any past contracts because that move would not hold up in court. Instead, he argued the executives don't deserve bonuses under the contract.

Watch what Frank says about the bonuses »

"We own this company in effect, and we're not asking that these bonuses be rescinded because we have lent money to the company. I believe we are saying as the owners of the company, we do not think ... we should have paid bonuses to people who made mistakes who were incompetent," said Frank, chairman of the House Financial Services Committee.