WASHINGTON (CNN) -- Veterans groups are angry after President Obama told them Monday that he is still considering a proposal to have treatment for service-connected injuries charged to veterans' private insurance plans. 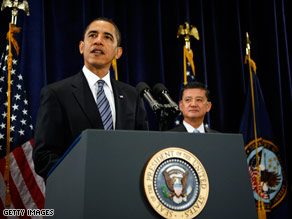 Leaders of the country's most prominent veterans groups met Monday at the White House with Obama, Veterans Affairs Secretary Eric Shinseki, White House Chief of Staff Rahm Emanuel and Steven Kosiak, the director in charge of defense spending for the Office of Management and Budget.

Some of the veterans groups were caught off guard when the president said the administration is still thinking about the idea as a way of generating $540 million for the Department of Veterans Affairs in 2010. The groups and some members of Congress have been very vocal in opposing the idea.

The message, according to some of the people in the room, was that if the groups do not like this idea, they need to come back with another way of saving or raising revenue for the VA.

"I got the distinct impression that the only hope of this plan not being enacted is for an alternative plan to be developed that would generate the desired $540 million in revenue," Cmdr. David Rehbein of the American Legion said in a written statement.

But the chairman of the Senate Committee on Veterans' Affairs vowed Tuesday that the plan would never gain the panel's approval.

"VA's sacred duty is to care for veterans injured in honorable service to our nation, and the department should not turn to wounded warriors' private insurance to pay for combat injures," said Sen. Daniel Akaka, D-Hawaii. "Under my chairmanship, the Veterans' Affairs Committee will not advance any such legislation."

White House spokesman Robert Gibbs said no decision has been made.

"The president and the [veterans service organizations] had a good conversation, and veterans can be assured that the president understands any concerns that they would have," Gibbs said. "The budget the president has proposed represents an historic increase in discretionary spending to take care of our wounded warriors: those that have been sent off to war, have protected our freedom and have come back wounded."

He added, "this president takes very seriously the needs of our wounded warriors that have given so much to protect our freedom on the battlefields throughout the world."

Obama did most of the talking for the administration in the session with veterans representatives, participants said. Shinseki did not speak much in the meeting, which was described as "professional" by David Gorman, executive director of Disabled American Veterans.

The president was sympathetic to the needs of veterans, Gorman said, but insisted that the insurance companies are getting away with not paying for anything.

"The vets are paying premiums to insurance companies, and that is a free ride that needs to stop," Gorman said in describing the president's message to the group.

The groups oppose the idea because they believe that the government has a moral obligation to pay for service-connected injuries for the men and women who risked their lives serving the country.

"This flies in the face of the VA's covenant to cover all service-related health-care expenses," said Jay Agg, a spokesman for AMVETS.

The groups also say that the cost of treating service-connected injuries could lead to veterans quickly maxing out their benefits in third-party insurance, risking coverage for not just them but their families, who are also covered under the plans. In addition, they foresee premiums rising to cover the cost of treating the service-connected injuries.

"We are going to go back in and fight this thing tooth and nail," Gorman said.

He said the president complained that instead of commending the significant budget increase for the VA -- an 11 percent increase in 2010 and $25 billion over five years -- the groups are complaining about this proposal. But Gorman said that the issue of third-party billing is fundamental to the VA and that it is a "distraction" from discussing the budget increases.

Another group, the Iraq and Afghanistan Veterans of America, said that although it is encouraged by the increase in money for veterans' health care, the billing proposal is not acceptable.

"Veterans of all generations agree that this proposal is bad for the country and bad for veterans. If the president and the OMB want to cut costs, they can start at AIG, not the VA," said Paul Rieckhoff, the group's executive director, in a written statement.

The opposition is not a surprise to the White House. The groups had sent a letter opposing the idea when it was just a rumor. Last week, Congress weighed in when members of both the House and Senate Veterans Affairs committees told Shinseki at separate meetings that they objected to the plan.

Shinseki was told by Sen. Patty Murray, D-Washington, that it would be "dead on arrival." Rep. Mike Michaud, D- Maine, said that if it were presented, he would oppose the entire budget.

It is unconscionable, and it is an insult to our veterans who have been hurt overseas," Michaud said. "It is just unbelievable that anyone would ever think of doing that in this budget."

At the time, Shinseki would say only that the idea was under consideration but no decision had been made.

The groups have another meeting with the White House on Thursday to suggest other options. Both AMVETS and Disabled American Veterans believe that the VA could raise more revenue by being more aggressive about pursuing billings for non-service-connected treatments. Increasing third-party billing for non-service related injuries by 10 percent, suggested Agg, would free up more money to help service-related injuries.

Another idea that will be presented would be to bill Medicare.

"This, we believe, would more easily meet the president's financial goal," said Rehbein, of the American Legion.

Gorman said his group is willing to concede some money in the VA budget to avoid the insurance proposal.

"If it comes down to this issue, which is fundamental to the VA and what it should do, we are willing to give up a couple billion to salvage this issue," Gorman said.

A VA spokesman deferred all questions to the White House. White House officials were not immediately available for comment.