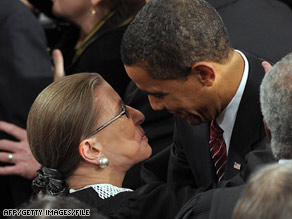 President Obama greets Justice Ruth Bader Ginsburg on her arrival for his February 24 address to Congress.

The treatments will begin later this month at the National Institutes of Health outside Washington, the court said.

In a statement, the justice said the treatment is "not expected to affect my schedule at the court. Thereafter, it is anticipated that I will require only routine examinations to assure my continuing health."

Ginsburg, who turned 76 on Sunday, has consistently signaled her health outlook is positive. She termed the February 5 removal of her cancer "successful," and was back on the bench 18 days later when the high court resumed oral arguments.

Ginsburg's post-op recovery has gone well, and doctors and the family are cautiously optimistic, court sources said. The disease was caught early and had not spread beyond her pancreas, doctors have said.

"Cancer patients with no evidence of disease after surgery but who have a statistical chance that there is microscopic spread often get chemotherapy to kill off that disease," explained Dr. Otis Brawley, chief medical officer of the American Cancer Society.

Getting back into her regular routine was important to the justice, and it would help her cope with future medical treatment, sources close to her said. She successfully fought colorectal cancer a decade ago.

The low survival rate is a result of the disease commonly going undetected until it has reached an advanced stage.

Ginsburg -- the only woman on the Supreme Court -- entered a New York hospital after a CT scan in January "revealed a small tumor, approximately one centimeter across, in the center of the pancreas," a previous news release said.

She has kept a busy schedule, on and off the bench. Since her diagnosis, she has released three opinions, attended President Obama's February 24 address to Congress, gone to an opera production in the company of Justice David Souter, and traveled for several speeches.

She told an audience last week in Boston, Massachusetts, that she had no plans to retire, but on the subject of court retirements she hinted cryptically, "We haven't had any of those for some time, but surely we will soon."

Ginsburg, Souter and Justice John Paul Stevens frequently have been mentioned as likely to step down in the next few years.

"She said when you're up to chemotherapy, you do it on Friday, Friday afternoon. You'll get over it over the weekend, and you'll be able to come to the court on Monday," said Ginsburg, who noted O'Connor returned to work nine days after her breast cancer diagnosis. "So I've been following her advice meticulously."

Ginsburg has been on the Supreme Court since 1993.