WASHINGTON (CNN) -- A national poll indicates that nearly two out of three Americans approve of the job President Obama's doing, but the survey suggests that people appear to be split on how he's handling some aspects of the economy. 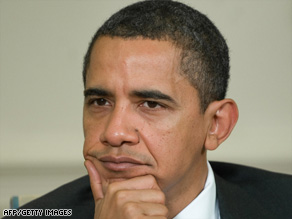 President Obama may have some time on his hands in dealing with U.S. economic troubles, a new poll says.

Obama's job approval rating stands at 64 percent in a CNN/Opinion Research Corp. survey released Monday. That rating is down 3 percentage points from mid-February.

When asked about the economy, 59 percent of respondents approve of how Obama's performing, with 40 percent disapproving.

"Most of the Americans who disapprove of Obama are Republicans," said Keating Holland, CNN's polling director. "His approval rating is 59 percent among independents and over 90 percent among Democrats, but two-thirds of Republicans have a negative view of his actions in office so far."

Two out of three approve of how the president is helping the middle class, 64 percent give Obama a thumbs up on unemployment, 62 percent approve of how he's handling taxes, and 54 percent support him on the home foreclosure crisis.

But Americans appear to be split on how the president is dealing with the massive federal budget deficit, the problems facing the major U.S. automakers and the federal bailout of Wall Street and the major American banks.

Watch a report on Obama's plan to boost small businesses »

"There's a lot of good will toward President Obama in this poll. Americans overwhelmingly hope he will succeed. They believe he will succeed, and they support his economic recovery program. But we're seeing growing doubt about some details," said Bill Schneider, a CNN senior political analyst.

Five days of unprecedented worldwide reporting on the money meltdown that's changing your life.
All week on CNN

"One in four Republicans wants Obama's policies to fail," Holland said. "But six in 10 Republicans think the president will fail."

A big political question is whether this recession will become Obama's. The poll suggests that the president may have some time on his hands. If the economy does not improve over the next year, 54 percent said they'll still blame former President Bush and the Republicans for the mess, with 32 percent pinning the blame on Obama and the Democrats who control Congress.

"This is not shaping up to be a rerun of Bill Clinton's first term," Holland said. "When Clinton came into office, he tried to blame another president named Bush for the country's economic problems. But only 39 percent of the public in 1993 said they were likely to blame the GOP if the economy didn't improve on Clinton's watch.

"Obama may not go blameless if the economy doesn't improve, but it looks like the public is willing to cut him more slack than they gave Clinton in 1993."

The CNN/Opinion Research poll was conducted Thursday through Sunday, with 1,019 adult Americans questioned by telephone. The survey's sampling error is plus or minus 3 percentage points.