(CNN) -- Former President Bill Clinton said Wednesday that overhauling the nation's health care system should be easier now than when he tried in the early '90s, despite the current financial doldrums. 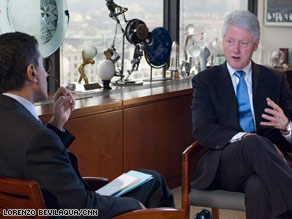 "I think that the consensus is overwhelming," Clinton said in an interview with Dr. Sanjay Gupta taped for CNN's "Larry King Live."

"The politics and the economics are much better now and the policies are better," he said. "They've made advances over where we were."

In 1993, Clinton pushed for a universal health care plan, with his wife, then-first lady Hillary Clinton, heading a task force on the issue. Small-business groups, doctors, the insurance industry and congressional Republicans lined up to fight the plan, which was officially declared dead in Congress the next year.

President Obama's plan, which offers people the chance to buy into the same health plan federal government employees use, avoids some of the more controversial aspects of that effort.

"We have a simpler, clearer path to the future than we did when I was there," Clinton said.

He tried to solve the health care crisis and couldn't. Bill Clinton gives his take on Obama's plan.
Tonight, 9 ET

Those differences have made doctors, small-business owners and even some in the insurance industry more open to reform, Clinton said.

Plus, Democrats now hold comfortable majorities in both the House and Senate, meaning fewer Republican votes are needed to reach the 60 votes needed to avoid a filibuster in the Senate.

Clinton said Obama is well-situated to handle the fight for health care reform, in part because of the fine-tuning his plans went through during his Democratic nomination fight with now-Secretary of State Hillary Clinton.

He cited a health care forum in which Obama, Clinton and others spelled out their plans, opening them up to criticism from their opponents and creating the opportunity to continue improving them.

"By the time the primary was winnowed down to two candidates, there was some difference on how universal the coverage would be, but Hillary's plan and then-Sen. Obama's plan looked pretty close," Clinton said. "The president then made it very clear he was going to pursue this."

"I believe that health care and education and energy are all economic issues," he said.

"For many people, many working families in America, before the financial crisis, the economic problem they had was health care," he said. "Health care was driving the majority of the bankruptcies in this country. It was keeping parents up late at night."