(CNN) -- As a spending bill loaded with pork makes its way through Congress, President Obama is getting pushback from members of his own party who are questioning his vow to end wasteful spending. 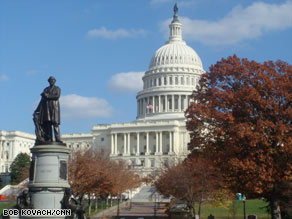 The Senate could vote on the spending bill as early as Thursday.

The president on Wednesday pledged turn tide on an "era of fiscal irresponsibility," reiterating his campaign promise that the days of "pork ... as a strategy" are over.

And in a prime-time address before a joint session of Congress, Obama last week praised the $787 billion stimulus package signed into law, telling the nation, "I'm proud that we passed a recovery plan free of earmarks, and I want to pass a budget next year that ensures that each dollar we spend reflects only our most important national priorities."

But some in the audience found that hard to swallow.

"There was just a roar of laughter -- because there were earmarks," said Sen. Claire McCaskill, D-Missouri.

Watch more on the earmarks in the bill »

The scoffing continues as the president hammers away at reducing wasteful spending and saving taxpayers money while lawmakers on Capitol Hill load up a spending bill with more than 8,000 earmarks totaling nearly $8 billion.

The legislation in question is a $410 billion omnibus bill that would keep the federal government running through the rest of the fiscal year, which ends in September 2009.

According to Taxpayers for Common Sense, a group that monitors government spending, the bill includes:

About 60 percent of the earmarks are from Democrats, and about 40 percent are from Republicans, according to Taxpayers for Common Sense.

Ryan Alexander, the president of the Taxpayers for Common Sense, pointed out that not all earmarks are bad.

Earlier this week, 14 Democratic senators met to talk about their concerns with the spending. On Wednesday, Democratic Sens. Evan Bayh and Russ Feingold called on Obama to veto the bill.

Watch Feingold talk about a 'teary-eyed' defense of earmarks »

"But the bloated omnibus requires sacrifice from no one, least of all the government. It only exacerbates the problem and hastens the day of reckoning," Bayh wrote in a Wall Street Journal editorial published Wednesday.

Democrats blocked amendments by Sens. John McCain, R-Arizona, and Tom Coburn, R-Oklahoma, that would have narrowed the spending on earmarks.

The spending bill made it through the House last week. A vote in the Senate could come as early as Thursday, but it's unclear if there are the 60 votes necessary to sent it to the floor since some Democrats aren't supporting it.

Obama is expected to sign the bill when it reaches his desk.

But Democrats speaking out against the pork could just be flexing their muscles, said CNN contributor Roland Martin.

"I would love to see these same Democrats have the courage to actually stand up, look their fellow senators in the eye, Democrats and Republicans, and say, OK, let's get rid of your particular project," he said.

"What often happens in Congress is, they complain in terms of the general ... What I am saying is, call them out. Put it on the table," he said.

Those defending the earmarks say they make up just a small portion -- less than 1 percent -- of the overall bill.

House Speaker Nancy Pelosi, D-California, on Thursday defended congressional earmarks, despite calls from the White House earlier this week to reform the process.

"The legislatively initiated proposals in the appropriations bill, I think, are an appropriate function of Congress of the United States," Pelosi said.

But Pelosi said she does believe Congress should cut back on the number of earmarks.

Pelosi said after Congress finishes the $410 billion spending bill for this year, she planned to work with the Obama administration to find ways to reduce the number of earmarks in future spending bills.

The White House says this bill is just last year's unfinished business -- and next time, it will be different.

Obama presented his budget summary to Congress last week, but the full details of his 2010 budget won't be available until April.