Obama pledges to turn tide on 'era of fiscal irresponsibility'

(CNN) -- President Obama signed a memorandum Wednesday designed to save the federal government $40 billion a year by overhauling what Obama calls the "broken system of government contracting." 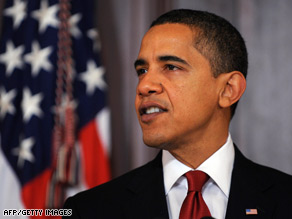 President Obama says the overhaul of federal contracting is designed to save $40 billion a year.

"It's time for this waste and inefficiency to end. It's time for a government that only invests in what works," Obama said.

The president said the country must "turn the tide on an era of fiscal irresponsibility so that we can sustain our recovery, enhance accountability and avoid leaving our children a mountain of debt."

Obama said Wednesday that part of his plan to reduce deficit spending includes "reforms in how government does business, which will save the American people up to $40 billion each year."

He said government spending on contracts has doubled in the past eight years to more than half a trillion dollars.

"We are spending money on things that we don't need, and we are paying more than we need to pay, and that's completely unacceptable," Obama said.

Pointing to defense spending, the president said he will "do whatever it takes to defend the American people."

The president said wasteful spending has many sources, including investments in unproven technologies, a lack of oversight and no-bid contracts.

"We need to invest in technologies that are proven and cost effective. We need more competition for contracts and more oversight as they are carried out," he said. "If the system isn't ready to be developed, we shouldn't pour resources into it. And if a system is plagued by cost overruns, it should be reformed. No more excuses, no more delays. The days of giving defense contractors a blank check are over."

The president said his administration is taking immediate steps to overhaul government contracting.

Starting Wednesday, his budget director is working with Cabinet officials and agency heads to develop "tough, new guidance" for federal contracts by the start of the next fiscal year on October 1.

Obama urged a reduction of outsourcing services that the federal government should perform itself, and vowed to strengthen oversight, transparency and accountability.

"I can promise you that this is just the beginning of a new way of doing business here in Washington, because the American people have every right to expect and to demand a government that is more efficient, more accountable and more responsible in keeping the public's trust," he said.

Vilsack said the Department of Agriculture has saved more than $1.5 million in the past few weeks by using technology to avoid traveling to meetings.

Napolitano said she ordered an efficiency review across her department last month to find ways to cut costs and make the department more effective.