WASHINGTON (CNN) -- Melody Barnes could be one of the most powerful inside players you've never heard of. 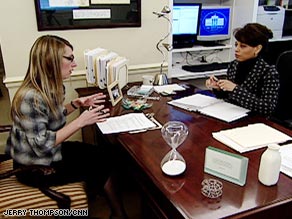 As director of the White House Domestic Policy Council, Barnes has a huge role in determining whether the domestic policy initiatives President Obama pledged to carry out will be enacted.

Barnes' job is to make sure the Cabinet and other agencies under the White House's control are putting Obama's policy agenda front and center, from health care and education reform to urban affairs and immigration.

From her West Wing office, she spends her days talking to Cabinet secretaries, members of Congress and advocacy groups.

"You know, my parents and friends ask the same questions, and I usually start out by laughing. Every day is completely different, but I think the singular theme would be meetings!" she said.

This week, she's been tasked by the president to pull together a summit that's intended to begin a national debate over health care reform. The White House says the event will include members of Congress from both parties, insurance and industry representatives, advocacy groups and citizens.

"This has to happen. If we are going to fix our economic circumstances, health-care reform has to be addressed. It is an important part of our federal budget. It also affects companies and their bottom line and their budgets, and also family budgets," she said in her White House office.

Shepherding a policy agenda is a different task for Barnes, who decided to get into public policy after a short stint in the private sector. She spent more than eight years as a key aide to Sen. Edward Kennedy, D-Massachusetts, and the Senate Judiciary Committee as well as working with the House Judiciary Committee and the Equal Opportunity Commission.

Watch: Who is Melody Barnes? »

She then took on a key leadership position at the liberal think tank Center for American Progress, helping shape ideas and policy proposals to counter the Bush White House agenda.

Former White House Chief of Staff John Podesta has worked with her at the center as well as with her during her Capitol Hill years and as an aide in the Obama transition.

"I think in a way, she tracks President Obama very well. I think she listens, she likes to solicit people's views, and then at the end of the day, she's willing to make hard calls and make hard decisions and move forward," he said.

Barnes makes time every morning for yoga. The meditation, she says, helps get through her marathon day of meetings and briefings. As a key White House official making sure the president's expansive domestic policy agenda is implemented, she probably can use help from every corner.

And she isn't alone in those in the West Wing who look to yoga.

"Yoga is very very important. It keeps me centered. I know yoga is also something that [White House Chief of Staff Rahm Emanuel] practices. I think there are a number of people around here that do the same," Barnes said.

She seemed destined for this type of career path after deciding to sell cupcakes for then-Democratic presidential nominee George McGovern as a third-grader, when she was 8 years old.

"The group of parents and students were doing this, and I still remember that, and it was important to me."

Barnes is one of a handful of power players in a White House whose key advisers are predominantly male. But she says there isn't a struggle to be heard in the White House.

"He respects her. He respects the other women that he's brought around. So he sends the signal to everyone that we all have to sit at this table, we put ideas on the table, we debate them, people have hard-charging debates, but at the same time, we respect one another. And when we walk out of the room, we are a team."

Named one of Washington's best-dressed women several years ago, she says style is something to embrace but not at the expense of substance.

"I think that if you go about doing your job and if you're serious about that and people see that you know your stuff and you bring your expertise with you to the table, people will respect that. But your sense of style and who you are also gives them a sense of where you're coming from," she said.

Right now, she is working seven days a week. Most days start first thing in the morning and run until 9 to 10 p.m. A deeply religious woman, she does make time to go to church each week.

And what does she do in her spare time? Plan her June wedding (with the help of a planner).

A woman known to friends as very organized, she does maintain her files.

"It is all at home, because I don't have time to do that here in the White House. That has been very fun. My mom has been up here helping me with my best friend select my wedding dress."