(CNN) -- The congressional showdown over Kansas Gov. Kathleen Sebelius' nomination to President Obama's Cabinet may focus less on her qualifications than on the issue of abortion, analysts said. 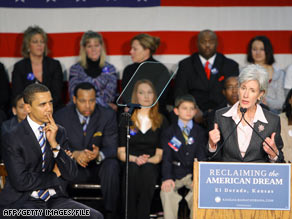 Analysts suspected that Obama would face a battle over abortion if and when he makes a nomination to the U.S. Supreme Court, but religious conservatives could use Sebelius as a warm-up for the seemingly inevitable fight.

Calling Sebelius an "enemy of the unborn," Catholic League President Bill Donohue said the Kansas governor's nomination is particularly disturbing because the health and human services secretary is one of the few members of the administration who can directly affect abortion policy.

"Sebelius' support for abortion is so far off the charts that she has been publicly criticized by the last three archbishops of Kansas City," Donohue said in a statement.

Watch why filling the Cabinet post is urgent task »

The liberal group Catholics United has come to Sebelius' defense, saying the Kansas governor has taken several steps to lower the abortion rate in her state. The group also has posted excerpts of a 2006 speech in which Sebelius said she opposed abortion.

"My Catholic faith teaches me that all life is sacred, and personally I believe abortion is wrong," she said then. "However, I disagree with the suggestion that criminalizing women and their doctors is an effective means of achieving the goal of reducing the number of abortions in our nation."

In May, Archbishop Joseph F. Naumann of Kansas City, Kansas, said that Sebelius' stance on abortion had "grave spiritual and moral consequences." He asked that Sebelius no longer receive Communion until she repudiated her stance and made a "worthy sacramental confession."

Naumann was reacting to Sebelius' veto of state Senate Bill 389 and the subsequent House version, titled the Comprehensive Abortion Reform Act, either of which would have tightened abortion regulations in Kansas.

In shooting down SB 389 in April, Sebelius wrote that the bill was problematic because it included no exceptions for pregnancies that endanger a woman's life and it allowed for individuals to seek court orders preventing a woman from obtaining an abortion, even if the procedure was necessary to save her life.

"I am concerned that the bill is likely unconstitutional, or even worse, endangers the lives of women," Sebelius said in a statement.

She further said that Kansas had striven to lower its abortion rates through adoption incentives, extended health services for pregnant women, sex education and support services for families.

Another lightning rod for Sebelius is attendance by Dr. George Tiller and his staff at a 2007 reception she held at the governor's mansion in Topeka. The doctor, who specializes in late-term abortions and once received the National Abortion Federation's highest honor, won the reception at a charity auction held for the Greater Kansas City Women's Political Caucus, according to the Topeka Capital-Journal.

Tiller is presently facing charges relating to his practice.

Last month, a district judge denied a motion to dismiss the case, meaning Tiller will go to trial on 19 misdemeanor counts relating to how he procured second opinions for late-term abortions, according to The Wichita Eagle.

Though Sebelius is dogged by many on the religious right, GOP Sens. Sam Brownback and Pat Roberts of Kansas seem willing to give her a pass on her stance on abortion.

Brownback, who sought the GOP presidential nomination and is one of the leading anti-abortion voices in the Senate, recently released a statement with Roberts, congratulating Sebelius and expressing an eagerness to work with their fellow Kansan on health issues.

The senators said they expect to have several differences of opinion with the Obama administration -- especially on health care funding and nationalized health care -- but they make no mention of the abortion issue.

David Brody, who covers the White House for the Christian Broadcasting Network, said the omission could pose a problem for anti-abortion advocates hoping to down Sebelius' nomination.

"It's a problem, and Sam Brownback has been in long step with them on the abortion issue. That's a setback for them," he said.

Meanwhile, progressive groups have lent their outright support to Sebelius.

Sebelius, 60, is the daughter of former Ohio Gov. John Gilligan, who led that state from 1971-1975. The two-term governor has been credited for her bipartisanship and her success as a Democrat politician in a longtime red state.

Her work with insurance companies -- both as an insurance executive and as Kansas' insurance commissioner -- will also lend itself to the work of the Cabinet post, her supporters said.

However, those who are predicting a tussle over her Cabinet nomination concede that her experience will not be the bone of contention when she goes before the Senate.

"The pro-life groups have an itchy trigger finger on this. The inbox was full before Sebelius was nominated. They're ready for a fight," Brody told CNN.

In a column last week, Brody wrote that Democrats have solid numbers in the Senate, and Sebelius could sail through confirmation hearings because some GOP moderates, such as Sens. Olympia Snowe and Susan Collins, both of Maine, are supporters of abortion rights.

Brody added that Sebelius is so qualified, the abortion issue may not be enough to derail her nomination.

The abortion fight, however, may be one that Obama's team wants to avoid, he said Monday.

"Do they want to be sucked in, if you will, to a fight over abortion? Or do they want to leave that for a summer battle over a Supreme Court nominee potentially?" Brody asked. "That's the danger here for the Obama administration, to be a distraction."

All About Kathleen Sebelius • Barack Obama