On CNN's "State of the Union," host and chief national correspondent John King goes outside the Beltway to report on the issues affecting communities across the country. This week King traveled to Michigan, to explore how American automakers' restructuring affects those who make their living from them.

LANSING, Michigan (CNN) -- Sherrill Freeborough has a disarming smile, an optimistic spirit and an uncertain future. 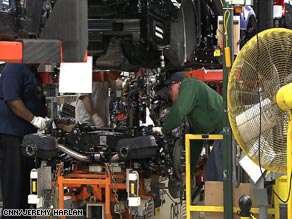 She owns two Saturn dealerships in the Lansing area, but will lose her partnership with General Motors in three years because the automaker is discontinuing the Saturn and Pontiac brands as part of its restructuring plan.

"I am a small business owner," Freeborough told us during a visit to one of her showrooms. "Everything I have I have put into the dealerships, my home -- everything is in the company. ... My husband still can't breathe. He still asks 'what are we doing? I thought you were just going to sell cars.'

"So, yeah, everything in my life," Freeborough said. "I can't have a bad day and go home and tell him. I have to be happy when I go home because everything we have is wrapped up in this company."

Across town, Mike Huerta is another stakeholder in the debate over General Motors' future. The unionized autoworker will be out of a job in the next few weeks.

The Delta Township assembly plant where Huerta works once had three shifts; it is now down to one. Across town at the Lansing Grand River assembly line, work is down from two shifts to one. Plus, workers expect more layoffs to come as GM promises to eliminate 47,000 jobs worldwide in 2009 as part of the restructuring plan it submitted to Congress in hopes of getting another $16 billion in federal bailout loans.

Huerta says that bailout is his best hope of someday getting called back to work at GM, and he bristles when asked about those in Congress who question whether GM management deserves the money, or whether it is the appropriate role of the federal government to step in to rescue a private company.

"It's scary to see United States senators beholden to foreign interests," Huerta said. "We had some senators from down South in particular with a lot of Nissan and Honda and Toyota plants basically come up and say that we should go bankrupt. They are not talking about somebody that you can't see. That means me. That takes away my family's livelihood."

Huerta, who has a two-year-old, said he has sharply cut back expenses since receiving his layoff notice. He said he's not eating out or going to the movie theater. He's also packing lunches for work. He even decided not to exchange Christmas gifts with his wife this past year.

Huerta is attending Lansing Community College in case GM doesn't call him back, "to get a little leg up" if he is forced into a horrible local job market.

Freeborough said she is waiting for critical answers from GM and fellow Saturn dealers who are determined to find a new product line to sell once GM ends their relationship. Those cars could be from India or China, and Freeborough concedes that could pose a sales challenge in a town defined by its long American auto industry heritage.

Freeborough said her customer base now remains loyal because of superior service. "A car is a car," she said. "As a small business owner, I feel really strongly about doing business."

Freeborough's service, along with her clients and used car sales, are keeping the business afloat this year as the punishing recession makes families unable or unwilling to make a major investment in a new car.

"I don't think anyone knows," Freeborough answers when asked when she believes the economy will take a turn for the better. But she vows her businesses will not collapse after the relationship with GM ends.

"People who don't succeed are the ones who give up," she said. "I am not giving up."

All About General Motors Corporation • Lansing (Michigan) • Layoffs and Downsizing