Commentary: If you oppose stimulus, don't take the money 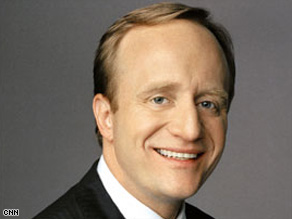 WASHINGTON (CNN) -- Gov. Mark Sanford of South Carolina took umbrage at my writing that his approach to the economic crisis is to do nothing. I'll deal with his "ideas" in a moment, but first let me make a modest proposal:

If Republican politicians are so deeply opposed to President Obama's economic recovery plan, they should refuse to take the money. After all, if you think all that federal spending is damaging, there are easy ways to reduce it: Don't take federal money.

Gov. Sanford can lead the way. South Carolina should decline to accept any federal funds for transportation, education, health care, clean energy or any of the other ideas President Obama is advocating to fix the economy. And the rest of the GOP can follow suit.

Justice Louis Brandeis famously called states "laboratories of democracy." So let's experiment. Gov. Sanford can be the guinea pig. His Palmetto State already gets $1.35 back from Washington for every dollar it pays in federal taxes, according to 2005 numbers, the latest calculated by the Tax Foundation, a nonprofit tax research group.

South Carolina is a ward of the federal government. It's been on welfare for years. If Gov. Sanford is so all-fired opposed to federal spending, let's start by cutting federal spending in South Carolina. Otherwise, he's got about as much credibility on fiscal conservatism as A-Rod has on steroids.

Under the Bush-Sanford economic theories, South Carolina's unemployment rate has reached 9.5 percent -- among the highest in the nation. But if Gov. Sanford wants to continue those policies, good luck to him.

Make no mistake about it, Republicans like Gov. Sanford want to go back to the bad old days of George W. Bush. In his CNN.com column, Gov. Sanford expends 605 words attacking President Obama's plan to turn the country around after eight years of Bush-Republican-Sanford economics.

That is his right, but attacking President Obama's plan is not itself an alternative plan. Nor is dredging up hoary old gripes about the New Deal. Nor, indeed, is deriding neighborhood electric vehicles -- which create jobs, save money and reduce pollution -- as "streamlined golf carts." But that is what Gov. Sanford offers us. iReport.com: Share your thoughts on the stimulus plan

Then Gov. Sanford turns to his ideas (keep in mind he was responding to my charge that he favors doing nothing). He devotes precisely one half of one sentence to his plan to save the world economy; 24 words that will create millions of jobs, restore liquidity to capital markets, protect investors and consumers, regenerate stagnant demand and restore the capitalist system. Here they are:

"... cutting the payroll tax, opening foreign markets through an expansion of our trade agreements, and reducing our corporate tax, which is among the highest worldwide."

Wow. As we say in the South, I've got the vapors. So cutting taxes and cutting trade deals will get us out of this mess? That's all we need to do?

We don't need to extend unemployment insurance, or update health information technology, or move to renewable energy or repair roads or rebuild bridges or modernize the power grid or prevent states and cities from laying off teachers and cops or any of the other myriad proposals in President Obama's plan?

To be sure, President Obama's plan includes tax cuts -- mostly for middle-class families. But cutting taxes on corporate profits is of little utility when there are no corporate profits to tax. And precisely with whom would Gov. Sanford cut these miraculous trade deals? In case he hasn't been watching CNN, the entire world economy is in the tank.

If cutting taxes for the rich and for big corporations and promoting foreign trade alone could energize the economy, we wouldn't be in this mess. But maybe Gov. Sanford is right. Let's keep our federal money -- give it to states where the governors will actually put it to good use. We'll let Gov. Sanford try his plan, we'll try President Obama's plan.

Something tells me Gov. Sanford won't take that gamble. Because for all his rhetoric about hating federal spending, he can't wait to get his hands on our money.

All About South Carolina • Barack Obama • Recessions and Depressions