WASHINGTON (CNN) -- An amendment in the $787 billion economic stimulus package passed by Congress Friday would severely restrict bonuses and other forms of compensation for top executives at companies receiving federal bailout money. 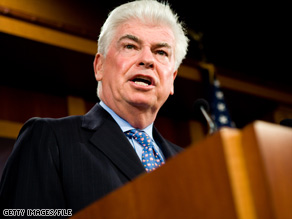 The amendment by Sen. Chris Dodd, chairman of the Senate Committee on Banking, Housing and Urban Affairs, would impose wide-ranging restrictions on how -- and by how much -- top executives at companies receiving federal bailout money can be compensated.

The measure would cap bonuses -- already often far more lucrative than base salaries for top executives -- and could require executives at companies that have already received bailout money to pay back some of their compensation if it exceeded certain limits.

Dodd, a Democrat from Connecticut, said the amendment was aimed at imposing "tough new limits on huge bonuses" for executives at firms receiving money from the government's Troubled Asset Relief Program, or TARP.

"The decisions of certain Wall Street executives to enrich themselves at the expense of taxpayers have seriously undermined public confidence in efforts to stabilize the economy. American taxpayers deserve better," Dodd said.

But some financial industry advisers and analysts said Saturday that the amendment was far tougher than what even President Barack Obama and Treasury Secretary Timothy Geithner proposed recently, particularly in the number of high-paid executives and employees it would affect.

It will be up to the Treasury Department to implement the restrictions in Dodd's amendment if the stimulus package, which is awaiting Obama's approval, becomes law.

Among the many provisions of Dodd's measure:

• Severance payments known as "golden parachutes" for senior executive officers or the next five most highly compensated employees would be banned at companies receiving TARP funds, ending those often sizeable severance payments for departing executives.

• Top executives at TARP-funded firms would be barred from receiving bonuses exceeding one-third of their annual salary. For many top executives, that would mean a dramatic reduction. The Wall Street Journal cited as an example the 2007 compensation of Bank of America Corp. CEO Kenneth D. Lewis, who was paid a salary of $1.5 million that year, but actually earned a total of $16.4 million including a bonus, stock-option awards and restricted stock. At the same salary level, Lewis' 2009 compensation would be restricted to about $2.25 million under the Dodd provisions, the Journal said.

• The secretary of the Treasury must review past compensation paid to the top 25 employees of TARP recipients and seek reimbursements "if those payments were contrary to the public interest or inconsistent with the purposes of the [stimulus package] or the TARP," according to Dodd's statement.

The restrictions could have unintended consequences, some financial industry insiders said Saturday.

"Basically, this is encouraging the sales force -- the lifeblood of any company -- to look for work elsewhere, to leave [TARP-backed companies] for healthier companies where they can make more money," said Scott Talbott, senior vice president of government affairs for the Washington-based Financial Services Roundtable, a trade association representing 100 of the largest financial firms in the country.

"If the goal of TARP is to make companies stronger, to get them back on their feet so they can stand on their own, and this drives away key executives, this is a problem," he told CNN in a telephone interview.

Talbott also posed the question of what would happen on the Dodd amendment's sliding scale of restricted compensation at large firms when the top 20 earning employees are restricted and move down in income as a result.

"They are no longer that company's top 20 earners, others in the company now become the top 20. Are those 20 (then) under the compensation restrictions?" he asked.

Jim Reda, a New York-based compensation and corporate governance consultant, said TARP-funded firms could face a dilemma if the Dodd restrictions are imposed: either lose key executives to other companies or pay back the TARP money immediately and possibly jeopardize the company's capital position.

"It's not good for taxpayers to have [TARP] money in organizations where the executives are leaving or the company is weakened," Reda told CNN.

"My suspicion is that there are a lot of loopholes in this, " Reda said. "What it accomplishes is that it really confuses everybody."