From From Elise Labott
CNN

WASHINGTON (CNN) -- Days before U.S. Secretary of State Hillary Clinton heads to Asia on her first international trip, the State Department Tuesday voiced concern about an imprisoned Chinese blogger whose trial has been indefinitely delayed. 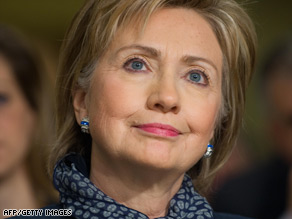 U.S. Secretary of State Hillary Clinton will raise concerns about China's human rights record on her visit to China.

Huang was detained last June after working working to help the families of children killed in the May 12, 2008, Sichuan earthquake because of the collapse of shoddily constructed school buildings, Duguid said. He was charged with illegal possession of state secrets after posting the appeals and complaints of the families online.

Huang's trial was scheduled for February 3 but was indefinitely postponed a day before it was supposed to start.

Duguid says the United States has raised its concerns about the case several times with Chinese officials in Washington and Beijing and have requested permission to send an official to attend his trial.

In addition to releasing Huang, Duguid called on China to "ensure that all legal and administrative proceedings against him are conducted in a manner that is both transparent and consistent with Chinese law and international human rights norms.

"Mr. Huang has consistently worked within China's legal system to protect the rights of his fellow citizens," Duguid said. "We believe these types of activities support China's efforts to institute the rule of law.

The U.S. concern about Huang come in advance of Clinton's visit to China next week, when acting spokesman Robert Wood said she will raise long-standing concerns about China's poor human rights record.

"On this trip, human rights is going to be an important issue," Wood said, but declined to give details about any specific cases Clinton would raise with Chinese officials.

The Obama administration is already facing criticism for not making good on its pledge to make human rights a priority, refusing to participate in a United Nations review of the human rights records of several major countries.

The U.N. Human Rights Council is reviewing the records of 16 countries with shoddy human rights records, including China and Indonesia -- two countries Clinton will visit on her swing through Asia.

The State Department said Tuesday that U.S. officials are sitting in on the Geneva meetings and taking notes but are not taking part in the discussions, which has prompted criticism from Congress and human rights groups.

"I was shocked and disappointed to learn that for the last week, the U.S. delegation has been silent," said Rep. Frank Wolf, R-Virginia, a leading advocate of human rights in Congress.

Wolf said the United States "is off to the wrong start on making human rights a priority," adding he planned to write to Clinton to take a strong stand on the matter when she visits Beijing.