Commentary: Free trade has sold out the American worker

By Virg Bernero
Special to CNN

Editor's note: Virg Bernero is the mayor of Lansing, Michigan and chairman of the Mayors and Municipalities Automotive Coalition (MMAC). He is one of the mayors of U.S. cities appearing on "American Morning" this week. 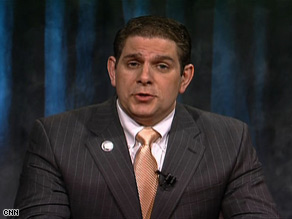 Mayor Virg Bernero says the American worker has been sold out by backers of free trade.

(CNN) -- While America reels from the worst economic crisis since the Great Depression, it is time that we take a deeper look at the root causes of our current predicament.

The cold, hard truth is that the unholy alliance between Washington and Wall Street has sold out the American worker and exported our standard of living.

Driven by the insatiable greed of Wall Street profiteers and accelerated by the false promise of free trade, our manufacturing base has been chased out of this country and along with it the livelihood of millions of hard-working Americans.

It's fashionable these days among the politicians, pundits and so-called experts to claim that free trade is actually good for us. They say it enables us to buy cheaper goods made with cheap foreign labor and this, in turn, raises our standard of living.

With all due respect, the free traders need to ask themselves a more fundamental question: how will Americans buy those goods when they don't even have a paycheck that covers their mortgage, much less the college tuition for their children?

Hear how cities in the US are coping with the recession all week on "American Morning"
Weekdays 6 a.m. ET

More than one pundit has told me I need to take a broader view. As the mayor of one of America's countless manufacturing communities, the only view that matters is the one my citizens see every day: Record job losses, home foreclosures and, thanks to the Wall Street wizards, a credit crunch so severe that it is nearly impossible to finance a new car.

This isn't a predicament faced just by Michigan or the Midwest. This is the story of America, told in thousands of desperate households from Connecticut to California.

The pundits claim our manufacturing sector is a relic of the old economy. We're told that we just can't compete anymore. We're told that our future is in the service economy, that jobs in health care and finance and knowledge-based industries will recreate the prosperity our nation once knew.

The truth is that our industrial heritage is an example of everything that was right with our nation's economy. Good jobs with good benefits created the middle class in this country, and now it is being systematically dismantled under the banner of free trade and globalism.

Those who continue to espouse free trade ominously warn that protectionism is the wrong path for our nation; that challenging the holy doctrine of free trade invites a global trade war.

Yet we already face rampant protectionism across the globe. Pursuing a free trade agenda in a protectionist world is tantamount to unilateral disarmament.

Our trading partners routinely employ taxes, tariffs and subsidies that underwrite their exports and restrict American products from entering their home markets. They use currency manipulation to reduce the relative cost of their goods here in the USA.

The difference is that Hyundai doesn't have to pay legacy costs. The Korean government takes care of their retirees. Hyundai doesn't pay health care costs because they have national heath care. If you don't think that's an unfair advantage, you're kidding yourself.

If we are going to have any chance to compete globally, our government must get involved in our industry and help us rebuild America's industrial might before it is too late.

There's no question that we need this stimulus package. We need the reinvestment in America's infrastructure and in the working people of this country. We need tax cuts delivered directly to the American worker. We need education and retraining for the "green collar" jobs of the future.

But we need more than a short term shot in the arm. We need a long-term strategy to rebuild the American economy that provides jobs and economic security to the millions of hard-working American families who have been sold down the river by unfair trade policies.

We need fair trade agreements so that the most productive workers in the world -- American workers -- can put their skills to work and compete in the global economy.

We recently watched our athletes successfully compete in the Olympics against nations of the world. When the playing field is level, Americans can compete against the best from any nation. With fair trade instead of free trade, American workers can once again bring home the gold.

The opinions expressed in this commentary are solely those of Virg Bernero.