(CNN) -- Actress Ashley Judd says a wolf management program backed by Alaska Gov. Sarah Palin is "incredibly savage ... it's not right, it's not appropriate, it makes no sense on any level." 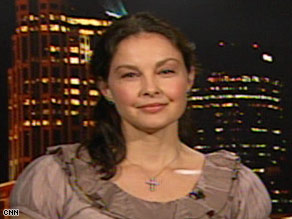 Appearing on CNN's "Larry King Live," Judd repeated her criticism of a program that allows hunters firing from aircraft to shoot wolves to thin the numbers of the animals.

Judd recently appeared in a video for the Washington-based Defenders of Wildlife Action Fund, which also opposes the Palin-backed aerial hunting program. Referring to the former Republican vice presidential candidate by name in the video, Judd says that Palin is "championing the slaughter of wildlife."

"When Sarah Palin came on the national scene last summer, few knew that she promotes the brutal aerial killing of wolves," Judd says in the video, adding, "It is time to stop Sarah Palin and stop this senseless savagery."

Palin responded on Tuesday, releasing a statement calling Defenders of Wildlife Action Fund an "extreme fringe group," and saying, "It is reprehensible and hypocritical that the Defenders of Wildlife would use Alaska and my administration as a fundraising tool to deceive Americans into parting with their hard-earned money."

Judd said Alaska's program is a "distortion" of wildlife hunting under normal circumstances, and that the program attracts "urban hunters, trophy hunters from out of state."

Palin did not appear on "Larry King Live," but Rod Arno, executive director of the Alaska Outdoor Council, told King by telephone that only Alaska residents can participate in the aerial wolf-hunting program, and then they must obtain a state permit.

The purpose of the program is to facilitate control of Alaska's wolf population, which preys on moose and caribou, Arno said.

"The only criticism is from people who aren't up here participating in a predator-prey scheme," he said.

Judd was accompanied by Rodger Schlickeisen, CEO of the Defenders of Wildlife Action Fund, and he said "hundreds" of scientists have criticized the aerial hunting program.

Schlickeisen suggested that Palin's government allow television crews to videotape the hunting process "and you could put this out for all the people in American to see and she (Palin) could proudly stand up for it."