(CNN) -- The White House insists that it was entirely former Sen. Tom Daschle's decision to withdraw his nomination, but some observers say he didn't have a choice. 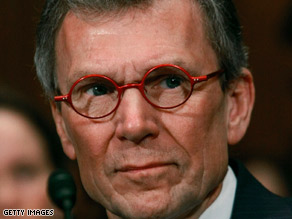 Tom Daschle said Tuesday that he's stepping aside as the nominee for secretary of health and human services.

Despite the controversy over his tax records and his work in a field that some consider lobbying, Daschle was expected to be confirmed.

His withdrawal shocked Capitol Hill, and Democratic colleagues expressed regret over his decision.

"I think one of the major factors had to be that the political climate has changed radically just in the last couple of weeks," CNN Senior White House Correspondent Ed Henry said.

The next day, news broke that Daschle hadn't paid his taxes in full. Daschle said Monday that he was "deeply embarrassed" for a series of errors that included failing to report $15,000 in charitable donations, unreported car service and more than $80,000 in unreported income from consulting.

Daschle recently filed amended tax returns and paid more than $140,000 in back taxes and interest for 2005-07.

"That, in this political climate, really tripped up Tom Daschle because it looked awful politically for this White House," Henry said.

In an interview with CNN's Anderson Cooper on Tuesday, Obama said he made a mistake in handling the nomination of Daschle.

"I think I screwed up. And, I take responsibility for it and we're going to make sure we fix it so it doesn't happen again.

"And I don't want to send a message to the American people that there are two sets of standards -- one for powerful people and one for ordinary folks who are working every day and paying their taxes."

At a news conference Tuesday afternoon, press secretary Robert Gibbs insisted that the White House did not pressure Daschle to step down.

Pressed on whether Daschle was given any sort of signal to resign, Gibbs said, "I don't know how much more clear I could be. The decision was Sen. Daschle's."

A Daschle ally familiar with his thinking said Tuesday that he was not aware of any White House pressure on the former Senate majority leader to withdraw his nomination.

Asked whether Daschle was pushed, the source said, "things don't work that cleanly."

The issue was not whether Daschle could "survive"; it was what that process "would do to Obama" and his health care reform and economic agenda. It's a question of the "price of that confirmation," he said.

The source said Daschle read the Tuesday New York Times editorial urging him to withdraw from consideration but would not say whether that might have played a part in his decision.

"Tom has been a politician for a very long time," the source said. "He understands this town. He made a mistake; he apologized, but timing matters. There was a critical mass building."

"I have to believe that Sen. Daschle having spent as many years as he has up here had a clear picture that there was going to be a delay, and I think he didn't want to contribute to that.

In announcing his withdrawal, Daschle said it was an honor to be chosen to lead the reform of America's health care system.

"But if 30 years of exposure to the challenges inherent in our system has taught me anything, it has taught me that this work will require a leader who can operate with the full faith of Congress and the American people, and without distraction," he said in a statement.

"Right now, I am not that leader and will not be a distraction."

Mark Preston, CNN's political editor, pointed out that Daschle has a "history of making 11th-hour decisions."

Six years ago, Daschle made a last-minute decision not to run for president after he had been all set to go.

"I think that the Tom Daschle we saw yesterday was all set to go, and then the pressure started mounting ... and then he decided to pull out," Preston said.

Although he was expected to be confirmed, it was also expected that he'd have to undergo a bruising confirmation hearing that could have led to negative headlines for Obama.

As news broke of the withdrawal, some senators said they were sad to see Daschle step aside, but others said it was the right thing to do.

"I'm in shock. I didn't know that. I don't know what happened," said Sen. Dianne Feinstein, D-California. "I talked to him ... the night before last, and he showed no signs of withdrawing."

Feinstein praised Daschle as rare person who could get something like health care through the Senate and said she wishes he had not withdrawn. "I have great faith in him."

Sen. John Cornyn, R-Texas, said Daschle "did a service to President Obama" by stepping aside.

"I think it really would have looked bad for the Senate to close ranks around a fellow member and sort of reinforce the idea that they were going to protect a member as part of the good ol' boys club," he said.

Daschle has a lengthy history with members of Congress. He represented South Dakota in the House of Representatives for four terms, and he served in the Senate for three terms. He was the Senate majority leader from June 2001 to January 2003 and served as the minority leader before losing his re-election bid in 2005.

Watch Republicans weigh in on the move »

Sen. Max Baucus, chairman of the Senate Finance Committee, said he was "a little stunned" by Daschle's decision.

Sen. John Kerry, D-Massachusetts, insisted that Daschle had owned up to his mistakes.