Documents give insight into increased violence in Afghanistan

WASHINGTON (CNN) -- Roadside bombs in Afghanistan have become the single biggest killer of civilians, coalition and Afghan troops, according to U.S. and coalition military documents obtained by CNN. 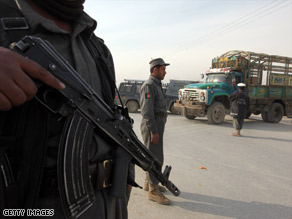 The documents, based on NATO statistics, show more than a 30 percent increase in such attacks on Afghan roads around the country from January to December 2008.

The report shows what has been reported from the battlefield over the last year as U.S. troop deaths have hit record highs and commanders ask for thousands more troops to quell the violence that has hit the region, where the fight was once called the "forgotten war" by many.

Since January 2008, U.S. and NATO troop deaths have risen 26 percent, according to the statistics. Afghan security forces deaths are up 64 percent in the same period.

The one constant is that while most of Afghanistan is experiencing relative calm, fighting continues to rage in the east and south, where 70 percent of the attacks occur.

In the south, where the Taliban are mainly focused, and in the east, where much of the al Qaeda forces remain and move back and forth between the Pakistan border, an influx of U.S. forces expected this year will reinforce war-weary U.S. and coalition troops.

Watch more on the Taliban attacks in Pakistan »

The NATO documents show that some of the main reasons for the increase in violence is more U.S. troops on the ground and an increase in operational Afghan forces hitting insurgent targets around the country, but sanctuary in Pakistan by insurgent forces allow them to retreat and re-attack.

Car bombs and attacks in the capital city of Kabul have also increased, fueled by what seems to be an unfettered insurgence by the Taliban over the past 12 months. In addition, NATO documents show that kidnappings and assassinations in the capital and around the country have increased by 50 percent.

The kidnappings are mainly money-based, taking people for whom the kidnappers believe they can get a ransom -- contractors, foreign nationals and wealthy locals -- according to U.S. military officials.

The increase in fighting has also taken a toll on the civilian population.

Between coalition attacks on targets with fighters hiding behind insurgents and Taliban and al Qaeda attacks on Afghan civilians, 2008 saw a 60 percent rise in civilian deaths.

The issue has become a political hot button for President Hamid Karzai, who is up for re-election this year.

Trying to keep his constituency happy, he has railed against the United States for air and ground attacks on targets where women and children have been killed.

The United States has attempted to reduce those numbers by changing approaches to attacking targets, not bombing suspect cars as they approach crowded areas or waiving off an attack on a house if there are innocent civilians inside, according to U.S. military officials.

In testimony on Capitol Hill last week, Defense Secretary Robert Gates was asked about the conundrum.

"My worry is that the Afghans come to see it as part of the problem, rather than as part of their solution. And then we are lost," Gates said.

But Gates is also aware of the public relations problem as Karzai stirs the pot.

"I don't believe that his rhetoric has been helpful, and I must tell you that when I was last there and visited Bagram, I got a briefing on the procedures that our pilots go through to try and avoid civilian casualties," Gates said. "I took a significant element of the Afghan press with me with their cameras so that they could see that briefing and see just how hard we do work at trying to avoid civilian casualties."

Gates and Joint Chiefs Chairman Adm. Michael Mullen have spoken to Karzai about his concerns on numerous occasions, officials said, and have related their same concerns on civilian deaths.

Pentagon officials said it is a touchy subject, but as one senior Pentagon official said, "it's not in our place to tell the president of another country what he can or cannot say."

All About Afghanistan • The Pentagon • Hamid Karzai