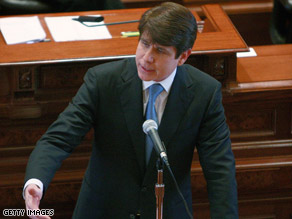 Blagojevich was arrested on federal corruption charges in December. Federal authorities allege, among other things, that he was trying to sell or trade the Senate seat that became vacant after Barack Obama was elected president.

After the governor's arrest, the state House voted overwhelmingly to impeach him. The Senate vote was 59-0.

Moments after removing him from office, the Illinois Senate also voted unanimously to prevent Blagojevich from ever holding political office in the state again.

"I'm obviously sad and disappointed, but not at all surprised, by what the state senate did today," Blagojevich said during a free-for-all news conference outside his Chicago home during which he answered reporters' questions, hugged supporters and promised a neighbor's child he'll play basketball with him this summer.

"It's something I knew they would do a long time ago," he said. "The fix was in from the very beginning."

Watch Blagojevich's reaction to his impeachment »

"As I've repeatedly stated, the governor must be held accountable for his actions to the legislature, in a court of law and to the people of the state of Illinois. ... Today's conviction speaks loud and clear that there are serious issues preventing him from fulfilling his responsibilities and I support putting new leadership in place."

In a written statement later Thursday, President Obama welcomed the end of the Blagojevich saga, at least as it played out at the statehouse.

"Today ends a painful episode for Illinois," he said. "For months, the state had been crippled by a crisis of leadership. Now that cloud has lifted, I wish Governor Quinn the best and pledge my full cooperation as he undertakes his new responsibilities."

Shortly after the vote, newly minted U.S. Sen. Roland Burris, D-Illinois, who was appointed to the seat by Blagojevich, issued a statement saying he stands behind the state Senate's decision to remove the governor from office.

Sen. Kwame Raul, a Democrat, said the governor had not presented any evidence in his defense and had not called any witnesses.

"He had the opportunity, and it's a lie for him to say that he did not have an opportunity," he said. "The governor presented absolutely no evidence in this case."

Elected officials in Illinois, who were forced to deal with the ugliness of the Blagojevich affair while many would have preferred to be celebrating the inauguration of Barack Obama, were quick to praise the Senate's action.

"Good riddance," U.S. Rep. Phil Hare, a Democrat, said in a written statement. "The Blagojevich scandal has been a national embarrassment. I hope and pray that today's decision by the Illinois Senate will give our state the fresh start it so desperately needs."

The scene outside of the former-governor's Chicago home turned strange shortly after the vote. Within minutes, a media throng outside watched as the governor's state security detail got into their vehicles and left.

A guard took a baby seat out of a van that had been used to carry the governor's family and left it outside of a garage.

At the news conference, Blagojevich thanked Illinoisans, who elected him governor twice after terms as a U.S. representative and state lawmaker.

"I'm really here today to say how grateful Patti and I and our daughters ... are for the opportunity to be able to serve the people of Illinois as their governor for the past six years," he said. "How blessed I personally feel to get up every day to fight for the average people."

The ex-governor finished his prepared comments and climbed the stairs to his home, then climbed back down to shake hands with neighbors. He then allowed reporters to crowd around and ask questions during an ad hoc news conference that lasted longer than his original statement.

At one point, he walked up to at least two neighbor children, hugging them and asking, "Do you want to be on TV?"

One of them asked, "Will you play hoops with me this summer?" Blagojevich answered, "Absolutely." After the conference, he again went into a crowd of onlookers to hug several members as people shouted things such as "We still support you" and "Forgive and forget."

During the trial's closing arguments Blagojevich appeared before the senators, saying he had done "absolutely nothing wrong."

"I'm here to appeal to you, to your sense of fairness, your sense of responsibility and to the truth," he said in a closing address that lasted less than an hour. It was the first time he had appeared at the impeachment trial, which began Monday.

The governor firmly denied wrongdoing Thursday, as he has all week on television talk shows.

The governor, who did not use notes during his remarks, said the allegations against him were unproven.

"There hasn't been a single piece of information that proves any wrongdoing," he said. "How can you throw a governor out of office with insufficient and incomplete evidence?"

As he did in his television interviews, Blagojevich railed against Senate trial rules that he said unfairly prevented him from presenting witnesses or evidence. After the governor's address, the Senate recessed for an hour before House prosecutor David Ellis gave a rebuttal to the governor's remarks.

"He talked more about the evidence with Barbara Walters on 'The View' than he did in this chamber today, where he's facing impeachment and removal from office," he said.

Earlier, in his closing argument, Ellis said the governor had demonstrated an "abuse of power" throughout his tenure as Illinois' chief executive.

Blagojevich railed against the trial on talk shows this week, calling it unfair and saying it sets a dangerous precedent. He has ignored trial deadlines and presented no evidence in his defense.

Watch as Blagojevich takes his fight to Larry King Live »

He told CNN's Larry King earlier this week that attending the trial "would dignify an impeachment process that's wrong and contrary to every fundamental civil liberty that we as Americans enjoy."