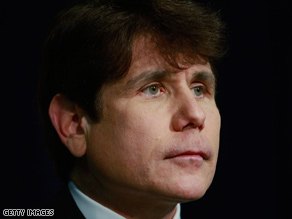 "I never require a client to do what I say but I do require them to at least listen to what I say. ... I wish the governor good luck and godspeed," Genson said in brief remarks to reporters.

Genson would not elaborate on his reasons for withdrawing from the case or any conversations he had with Blagojevich about his leaving the case.

Genson had headed Blagojevich's defense team since soon after the governor was arrested on December 9 on federal corruption charges. Among other allegations, federal prosecutors said the governor tried to sell the U.S. Senate seat vacated by President Obama.

Genson represented Blagojevich during proceedings in the Illinois state House in which legislators voted to impeach the governor. But on January 16, the U.S. attorney's office in the Northern District of Illinois said Genson would not represent Blagojevich in his state Senate impeachment trial. No explanation was given.

Blagojevich has denied any wrongdoing and said the House impeachment vote was politically motivated.

On Thursday, the outspoken Blagojevich called the Senate trial "a sham" and said the Senate is not allowing him to call witnesses in the trial, which is scheduled to begin Monday.

The Chicago Tribune reported that Genson said his inability to call witnesses or to know the identities of some parties in alleged schemes made it impossible to defend Blagojevich in the impeachment trial.

After Genson announced Friday he would leave Blagojevich's criminal defense effort, another of Blagojevich's attorneys, Sheldon Sorosky, said he was continuing to work on the case.

"I'm on the case, absolutely," Sorosky, whose law firm is separate from Genson's firm, said at an impromptu sidewalk news conference as he was leaving an office building.

"I was aware of Mr. Genson's position, and he's a good friend," said Sorosky. "The governor's a friend, and I understand his position and that's that." iReport.com: Do you trust your political leaders?

Sorosky, who has worked on Blagojevich's defense since the arrest, would not elaborate.

Asked by a reporter if he would recommend to Blagojevich that the talkative governor curtail his public comments, Sorosky said, "You can't tell the governor what to do or not to do."