WASHINGTON (CNN) -- The initial confirmation vote for Eric Holder, President Barack Obama's pick for attorney general, was postponed for a week Wednesday after a rancorous meeting of the Senate Judiciary Committee. 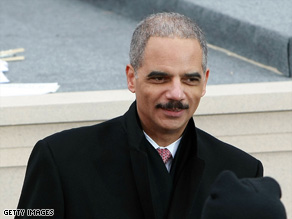 Eric Holder, President Obama's pick for attorney general, will have to wait for a confirmation vote.

Republicans, who want to question Holder about his role in a controversial presidential pardon when he worked in the Clinton administration, used a procedure that allows them to put off the vote.

Senate rules allow for a one-week delay if a panel member requests it. In this case, all the Republicans wanted the delay, according to their ranking member.

A clearly agitated Sen. Patrick Leahy, a Democrat and chairman of the committee, slammed his gavel and walked out after acknowledging that Republicans had the right to ask for the delay.

Sen. Arlen Specter, R-Pennsylvania, the only Republican present, complained of the "hurried nature of the hearings" and noted that Democrats had been given more time to consider all three Republican nominees for attorney general during the Bush administration.

Some Republicans indicated that they planned to seek a delay because of lingering questions about Holder's role as deputy attorney general during the Clinton administration.

The balking Republican lawmakers indicated that they want additional answers from Holder, who appeared before the panel Thursday. That prompted a strong reaction from Leahy.

Some GOP congressional aides have privately pointed to Democratic opposition to the more recent case of retired judge Michael Mukasey, whose nomination was saved only by a dramatic break with Leahy by Democratic Sens. Charles Schumer of New York and Dianne Feinstein of California.

Democrats uniformly support the Holder nomination and have the needed votes to pass the nomination.

Watch more on the confirmation hearings »

Filip and a cadre of career lawyers kept a low profile as they ran the wide-ranging functions of the dozens of Justice Department divisions and offices Wednesday.

Only the acting attorney general in the Civil Rights Division issued a public statement. Loretta King vowed that the department would continue to prosecute police who harm inmates.

King cited a jury conviction last week of a former Florida state prison official who poured near-scalding water on a prisoner's chest -- to punish him for feigning injury and lying on his jail cell floor -- and then failing to arrange medical treatment for the second-degree burns that resulted.

"While the vast majority of law enforcement officers carry out their duties in a lawful and professional manner, the Department of Justice will continue to vigorously prosecute those who cross the line and commit this type of unlawful act," King said.

The former prison official, Paul Tillis, could be sentenced to 10 years in prison and fined $250,000.