Most see Bush presidency as a failure, poll shows

WASHINGTON (CNN) -- As George W. Bush spends his final days in office, a national poll suggests that two-thirds of Americans see his presidency as a failure. 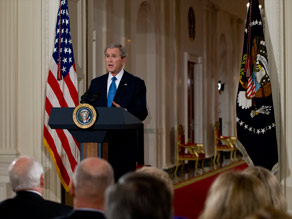 President Bush gives his farewell address to the nation on Thursday at the White House.

Sixty-eight percent of those questioned in a CNN/Opinion Research Corp. poll released Sunday said that Bush's eight years in the White House were a failure, with 44 percent saying this was because of his personal shortcomings and 22 percent blaming the failure on circumstances beyond his control.

Half of those polled say the United States could be better off today if Al Gore had been elected president in 2000 rather than Bush, with 27 percent saying the country would be worse off if Gore had won. Twenty-two percent say things would be about the same.

"Due to the Florida recount, Bush had the misfortune of coming into office under controversial circumstances," CNN polling director Keating Holland said. "A lot of Americans apparently remember those circumstances and now wish things had gone a little differently."

Only 3 percent of those questioned say Bush was one of the greatest presidents in the nation's history. Forty-six percent rate him a poor president.

"That's three times higher than the number who gave a failing grade to his father or Ronald Reagan when they left office, and it's 27 points higher than Bill Clinton in 2001," Holland said.

Thirty-one percent approve of Bush's performance in the White House, his final approval rating as president.

"The good news for Bush: That 31 percent figure is 7 points higher than it was in November, a typical 'nostalgia bump' that most outgoing presidents get," Holland added. "The bad news is that except for the rating Richard Nixon has when he resigned, that's the lowest approval rating an outgoing president has received in the six decades of scientific public opinion polling."