Obama at concert: The dream of our founders will live on 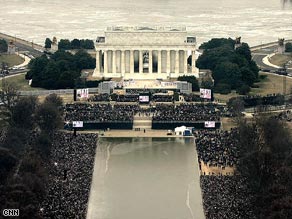 Thousands gather Sunday afternoon on the National Mall in Washington.

President-elect Barack Obama addressed a roaring crowd after 90 minutes of high-energy acts such as U2, Mary J. Blige, Usher and Beyonce.

"Welcome to this celebration of American renewal," he said.

"In the course of our history, only a handful of generations have been asked to confront challenges as serious as the ones we face right now."

"I stand here today as hopeful as ever that the United States of America will endure," Obama said. "That it will prevail; that the dream of our founders will live on in our time."

Obama spent the morning visiting Arlington National Cemetery and attending church before heading to the "We are One: Opening Inaugural Celebration" at the Lincoln Memorial. It was nothing but good vibes -- a brief respite for an incoming president who will face huge problems after he takes office Tuesday.

Bruce Springsteen opened the concert with his song "The Rising," singing, "How far I've gone/How high I've climbed/On my back's a 60 pound stone/On my shoulder a half mile line."

Along the National Mall, between the Capitol and the Washington Monument, people watched the concert on massive screens and sang along with "America the Beautiful" and "This Land is Your Land."

During U2's performance of "Pride (In the Name of Love)," a tribute to the Rev. Martin Luther King Jr., frontman Bono referenced the civil rights leader's "I Have a Dream" speech, saying that it was also, "an Irish dream, a European dream, and African dream, an Israeli dream, and a Palestinian dream."

Watch performances from the concert »

Obama mentioned the Washington Monument and the Lincoln Memorial, and also referred to King's "I Have a Dream" speech, which took place in the same spot where he was standing.

"Directly in front of us is a pool that still reflects the dream of a King and the glory of a people who marched and bled so that their children might be judged by their character's content," he said.

Obama said what gives him "the greatest hope of all is not the stone and marble that surrounds us, but what fills the spaces in between. It is you -- Americans of every race and region and station who came here because you believe in what this country can be and because you want to help us get there."

Vice President-elect Joe Biden also spoke, pointing to those "marble domes" and towers of Washington surrounding the crowd which represent the "majesty of a great nation -- all built stone by stone by American men and women."

Work is about "dignity" and "respect," he said, praising the ethic of hard-working Americans. "We owe them the chance to go to work each day knowing they have the thanks of a grateful nation."

Comedians and actors such as Steve Carell and Jamie Foxx brought some comic levity to the inauguration of a president who will face some serious problems in just a few days.

Foxx, always the showman, urged "Chi-town" to "stand up!"

Joined by his wife Michelle and their children, the President-elect stood up, laughing and clapping.

Foxx did an impression of Obama's speech election night, as Obama laughed.

Stevie Wonder belted out "Higher Ground" with Shakira and Usher. Herbie Hancock backed Sheryl Crow and will i. am. as they sang Bob Marley's "One Love."

The celebration caps Obama's shortened version of President Abraham Lincoln's 1861 rail trip to Washington. Obama will be inaugurated as the 44th president in Washington on Tuesday.

A CNN/Opinion Research Corporation survey released Sunday morning suggests most Americans see Obama's inauguration as a chance for a divided America to unify.

"You know the country is in the middle of a honeymoon when 6 in 10 Republicans have a positive view of Obama," said CNN Polling Director Keating Holland.

"This has to be incredibly overwhelming," King said.

Obama replied, "The notion that I will be standing there and sworn in as the 44th president, I think, is something that hopefully our children take for granted. But our grandparents are still stung by it and it's a remarkable moment."