Commentary: Let's treasure the old along with the new

By Wynton Marsalis
Special to CNN

Editor's note: Grammy winner Wynton Marsalis is artistic director of Jazz at Lincoln Center. He and former Supreme Court Justice Sandra Day O'Connor will lead "A Celebration of America" with the Rockefeller Foundation on Monday evening at the Kennedy Center featuring Angela Bassett, Dave Brubeck, and others. 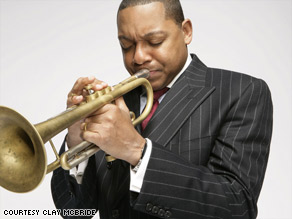 Wynton Marsalis says we should use the rich heritage of our culture as a roadmap for the future.

(CNN) -- On the dawn of the most historic inauguration of our time, we nervously await "change we can believe in."

Politicians and pundits analyze every pre-presidential utterance and come to quick conclusions about what will happen under the new administration.

A "wait and see" attitude dampens our euphoria. Will we come together or will even harder times drive us apart?

In the din of expert voices on everything imaginable, what we don't hear is informed conversation on how central culture is to our national well-being.

Our culture provides all the proof we need that we are together, that we have always been and, in spite of difficulties, will continue to be.

It's time for us to build a new mythology based on our many cultural triumphs instead of fixating on our never-ending missteps and conflicts.

The best of America was displayed during this election. That America is in the poetry and promise of the Constitution and the writings of Hawthorne, Twain and Hemingway, in every Negro spiritual. It sings through fiddlers' reels, in the lilting interpretations of ragtime, in the optimistic majesty of John Phillip Sousa.

That America transformed the whole world of music through the horn of Louis Armstrong and has passed it down through the sound of all jazz musicians everywhere. It is the well-woven cultural tapestry of America that will endure and see us through these and other unfortunate times.

At the root of our current national dilemmas is an accepted lack of integrity. We are assaulted on all sides by corruption of such magnitude that it's hard to fathom.

Almost everything and everyone seems to be for sale. Value is assessed solely in terms of dollars. Quality is sacrificed to commerce and truthful communication is supplanted by marketing.

The type of gamesmanship that separates races, genders and ages by "preferences" is a most cynical brand. The integrity and dedication shown by American artists throughout our history provides a most needed and unequivocal counterstatement.

On the eve of Dr. Martin Luther King's birthday, let's recognize the pernicious effects of separating people by generic categories. In the fields of science and technology, we accept that one generation builds on another.

But in the popular worlds of culture, there's a generation war in which "young" is considered energetic and good and "old" equals passé and tired. So inaccurate. Culture provides a stream of forever-fresh ideas. The generations need one another.

When I was a kid, I was caught up in that same confusion. I met the great Roy Eldridge when I was in high school in New Orleans. He'd been a star for more than 40 years by then, and he was ... well ... old. I had no real idea of who he was. I had a nice big Afro and he made it clear he didn't like it.

I was playing the flugelhorn that day and he wanted me to know he had been responsible for bringing that instrument to America. I couldn't have cared less about what some old man might have done in what seemed to me like slavery times.

Some years later, at a function for the Louis Armstrong house in Queens when I was 26, Roy showed me how to play with a plunger mute and then invited me to visit him at home. I remembered our first acrimonious meeting and didn't call. He passed away soon after, and his daughter reminded me, "My father wanted you to come by."

Then I realized he had needed me and I needed him. Later, someone showed me a film of Roy in a French club playing drums back in the 1930s. He lit the club up. People were all around him, loving him and his sound. His presence was electric. I thought, "This is the old man I saw New Orleans? Hmmph! I may be making stuff happen, but a lot more went on before I was born."

The most natural revolutionary requires a conservative establishment to rebel against. The most stilted tradition must have some new vivifying energy and imagination.

At this delicate time, all of us are called upon to support and participate in this new administration. The new president cannot cure all of our ills as if waving a magic wand. But if we focus on who we are as a nation and the culture that brings us together, we will face the uncertain future with supreme confidence.

Our artists, from Melville to Coltrane, have told the tale for us and for all times. Coming together is the American way. The Founding Fathers came together. We came together after the bloody Civil War. During the Civil Rights movement, we came together.

After Hurricane Katrina, the nation unified to help the citizens of New Orleans. Jazz musicians and dancers have come together on bandstands and in ballrooms for generations. And now, with the election of Barack Obama, we once again come together on a matter of national survival.

President Obama's inauguration is not a beginning, but the continuation of a glorious history that is hallmarked by the American people's desire to be one. Our Constitution demands it. And it forces us to a life much greater than the Founding Fathers could have possibly imagined. In the words of Duke Ellington, supreme master of the blues, "The people are my people." Hallelujah.

The opinions expressed in this commentary are solely those of Wynton Marsalis.