Senate OKs use of second half of bailout funds

(CNN) -- President-elect Barack Obama won a significant political victory Thursday, just days before his inauguration, as the Senate voted to release the second half of the $700 billion bailout package. 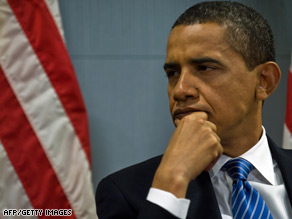 Barack Obama is facing bipartisan opposition to his plans for the bailout funds.

A number of senators crossed party lines on the vote. Six Republican senators voted for the release of the bailout funds, and nine Democratic senators voted to bar the use of the remaining billions.

Obama wants access to the remaining funds to expand lending to consumers and small businesses, but lawmakers from both sides of the aisle have expressed opposition to releasing the funds from the unpopular rescue plan.

Obama and his team members called senators all day in advance of the vote, a transition official said.

Earlier in the day, Larry Summers, Obama's economic adviser, sent a letter to Senate Majority Leader Harry Reid, seeking to reassure senators that the incoming administration would be more responsible with the second half of the bailout funds. Summers also pledged to commit $50 billion to $100 billion to address foreclosures.

In the letter, Summers wrote, "We completely agree that this program must promote the stability of the financial system and increase lending, preserve home ownership, promote jobs and economic recovery, safeguard taxpayer interests, and have the maximum degree of accountability and transparency possible."

Summers added, "The incoming Obama administration has no intention of using any funds to implement an industrial policy."

Eight Republican senators, led by Sen. David Vitter, R-Louisiana, said Wednesday that they would do all they could to prevent the Treasury from getting the remaining balance under the $700 billion Troubled Asset Relief Program.

"We should not give another administration a carte blanche to do anything it wants, which is what TARP has become," Vitter said.

Obama said Wednesday night that he's open to discussion but that failing to release the funds is not an option.

"If Congress has better suggestions, where they can show me that one approach is going to be better than another approach, I'm happy to take it. I don't have pride of authorship here," he told CBS' Katie Couric.

Obama said that the general outlines of the plan have been reviewed by economists from the left and the right and that he has confidence it will work.

"But it's going to take some time, and we've got to do it with some speed. So my main message to Congress right now is, 'Get it done,' " he said.

Speaking from the Senate floor Thursday, Sen. Bob Corker said the nation's banking system "is operating almost like a zombie."

"There are losses that are coming that they know they have to recognize. They're not willing to do that, and so we're in this period of time where, basically, U.S. tax dollars are in many ways being frittered away because we're investing in these companies, and then they're using those because they know of the losses that are coming," said Corker, R-Tennessee.

Obama has told members of his party that he would veto any attempt to block his access to the funds.

Rep. Barney Frank has put forth what he calls a "trust and verify" bill that would place tighter restrictions on how the Obama administration can spend the remaining bailout funds.

His bill also designates part of the funds for home foreclosure relief.

The House decided Thursday to delay a vote on the bill until next week.

Some lawmakers have said that although they want to give Obama his first legislative win, they are having a tough time answering to their constituents.

Democratic Sen. Claire McCaskill of Missouri said she can't go into a grocery store without getting bombarded by angry constituents.

"People are shouting out their cars at me ... 'When are you going to write me a check?' "

Republicans and Democrats have expressed displeasure with the way the first part of the bailout was allotted.