SEC nominee to be grilled on Madoff

(CNN) -- President-elect Barack Obama's choice to head the Securities and Exchange Commission is expected to face questions at her confirmation hearing Thursday about Bernard Madoff -- the alleged mastermind of the largest Ponzi scheme in history. 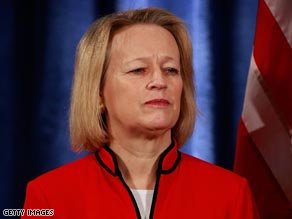 Mary Schapiro heads the Financial Industry Regulatory Authority and has been nominated to lead the SEC.

Now, questions are being raised about Schapiro's role in the failure to discover Madoff's alleged scheme. The SEC last week was criticized by Congress for missing red flags that alerted regulators to Madoff.

"The SEC never bothered to read the financial statements, not even for half an hour. Neither did FINRA," said U.S. Rep Brad Sherman, a Democrat from California who is also a certified public accountant.

"Clearly, Madoff's filings should have set off alarm bells, but there's a tendency in the regulatory agencies, both FINRA and the SEC, to basically say, we're dealing with gentlemen," Sherman said.

"Then the question is -- is this a systemic problem?" he said.

Schapiro has had a long career as a lead regulator, going back more than 25 years. In 1996, she was the president of the National Association of Securities Dealers Regulation, the agency that self-policed broker-dealers like Madoff.

That organization later morphed into FINRA, where she is the chief executive officer.

FINRA documents show the Madoff firm has been fined five times since 1963. FINRA spokesman Herb Perone said the fines represented "relatively minor trading violations." There were no findings of fraud.

Even though Madoff only operated one firm, Perone said, there were two separate entities -- the broker-dealer and investment-adviser sides. He said FINRA only had authority over the broker-dealer part of the business.

The SEC was in charge of the rest, and that's where FINRA says all the fraud occurred.

"No matter how much people would like to blame us on this, we had no jurisdiction. This is the SEC's responsibility," Perone said.

An SEC spokesman said Wednesday he could not comment because of the agency's ongoing investigation of Madoff.

He said FINRA is "trying very hard to do a much better job than they did in the past and I think it's embarrassing that this got past them, notwithstanding their best efforts."